Secure the package.
Pick up the manifest.
Get off the ship. 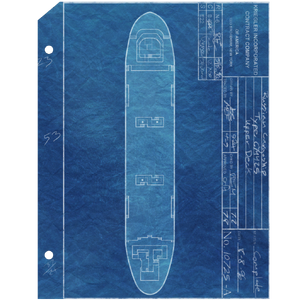 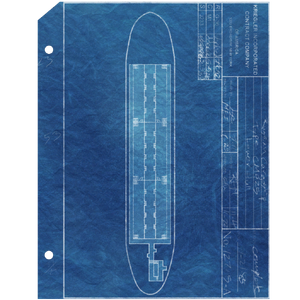 "According to our Russian Informant, an Estonian freighter is transporting dangerous material through the Bering Strait. Infiltrate the cargo ship and secure the 'package' by any means necessary."
— Call of Duty: Modern Warfare Remastered level description

"Crew Expendable" is the second mission in Call of Duty 4: Modern Warfare. It sees the player control SAS trooper John "Soap" MacTavish as the SAS retrieve a "package" on an Estonian Freighter known as the Väljakutse.

Taking place at night on a storm-lashed Estonian freighter known as the Väljakuste in the Bering Strait, Captain Price leads a team of SAS commandos onto the ship. His team, including SAS newcomer "Soap" MacTavish, rope down onto the ship's deck. Their objective is to recover a suspected nuclear device, which is hidden in a crate inside one of the ship's cargo holds. Captain Price and his team clears the ship's bridge and crew quarters quickly, then proceed through the cargo holds, killing all of the armed guards. They find the package, which turns out to be plutonium, but reports of "fast movers" approaching the ship mean they have to get out quickly, so Soap grabs the shipping manifest and they leave the ship. As they are leaving, the ship is fired upon by the unidentified aircraft, However the team successfully extract from the ship in the nick of time as it begins to sink. The raid was a partial success, although they could not secure the nuclear device for safekeeping; the manifest seized by Soap points to Middle Eastern military and coup d'etat leader Khaled Al-Asad as the intended buyer of the nuclear device.

The player starts in a helicopter. After rappelling down, player is ordered to clear the deck. After cleaning it, the S.A.S. soldiers will breach the door into the deck. Going down the hallway, the player will see a drunken crew-member (of the ship) staggering around. He will be shot and the player will continue on, although there is a piece of enemy intel inside the bedroom to the players right in the hallway. After exiting, the player will make a left down to the above-water hull. As the player moves forward, there is a platform with two guards. The player will or NPCs will kill them. As the player moves even further along there will be a structure with heavily armed enemies firing at the player. The player will then be instructed on how to crouch. Captain Price asks the helicopter to eliminate the enemies to which the pilots oblige. The squad then breaches into the hull of the ship.

Inside the Hull
Add a photo to this gallery

Player will then need to search the ship for the package while fighting the enemies. Once the player has picked up the manifest, enemy fast movers will bomb the ship.

The manifest
Add a photo to this gallery

After Price helps the player to get up, team must escape while the ship is sinking. When the team boards, player will need to jump to board the helicopter. Price will catch the player. Mission ends with the player watching the ship sinking.

Exit
Add a photo to this gallery 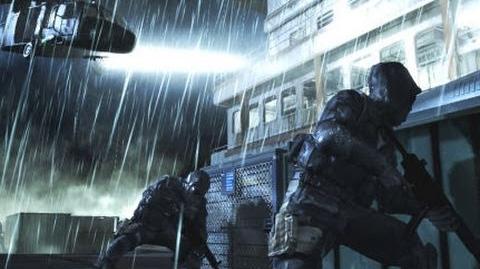 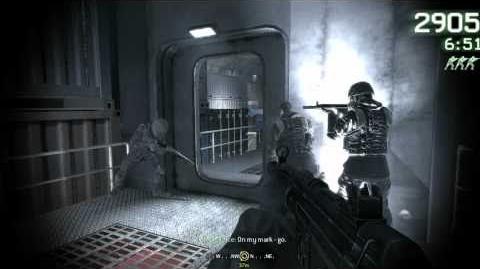 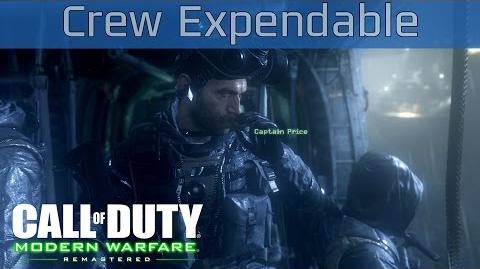 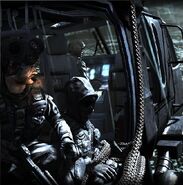 Team advancing in the ship.

Picture of the entire ship.

Soap's sketch for this mission.

Laptop 2
Add a photo to this gallery

Retrieved from "https://callofduty.fandom.com/wiki/Crew_Expendable?oldid=2359224"
Community content is available under CC-BY-SA unless otherwise noted.