"His followers sure did. And what does "Cordis Die" mean, exactly?"
— Crosby to the team.

Crosby is a SEAL Team Six Operative in Call of Duty: Black Ops II seen in the level "Celerium", "Fallen Angel" and "Odysseus".

As part of the J-SOC, he accompanied the team consisting of David Mason, Harper, Salazar and himself to an underground facility where they could learn of the suspicious activity that Raul Menendez was up to in Myanmar. He later appeared with the team in Lahore, Pakistan, where he teamed with Salazar and assisted Section and Harper in infiltrating Anthem.

He is last seen in the mission "Odysseus" as the pilot of the VTOL aircraft in the last part of the mission. Just after picking up Mason (and Harper if the player chose not to kill him in "Achilles' Veil"), he was shot in the arm by a Merc. He however survives and assists Section in piloting the VTOL aircraft. He is not seen again and doesn't participate in protecting the president and capturing/assassinating Raul Menendez. He appears in the post ending rock sequence dancing behind Briggs and Zhao. 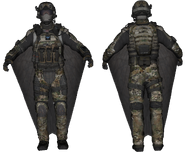 Render of Crosby in his wingsuit

Crosby, Harper and Salazar looking at the crate Erik Breighner is in

Crosby wounded
Add a photo to this gallery

Retrieved from "https://callofduty.fandom.com/wiki/Crosby_(Black_Ops_II)?oldid=2519672"
Community content is available under CC-BY-SA unless otherwise noted.