Call of Duty Wiki
Register
Don't have an account?
Sign In
Advertisement
in: Call of Duty 2 Single Player Levels

Get on the other side of the river, take out the artillery guns, destroy the tanks

"Crossing the Rhine" is the twenty-seventh and last level in Call of Duty 2. 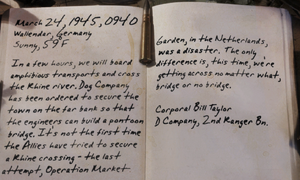 The player spawns in a boat with an M1919 in front of them. Open fire with it until the player is told to get out.

When leaving the boat, take a left and keep going until there is a log in front of the player. When the player gets there, toss a smoke grenade to the left of the guns and go through it. Upon reaching the guns, start tossing grenades at them. Hopefully, they will take out most of the troops. If not, hide behind the rubble to the left of the guns and take them out. Make sure to take out the troops in the house as well.

When the gun operators are dead, go through the house and out onto a street. Go across it, and the player will see another gun. Take out the operators from a distance. Some might try to hide behind nearby rubble, so flush them out with a grenade.

Toss a grenade around here

Rangers moving up the beach

Getting to Gun 3 is going to be a little more tricky. Go back to the street, but this time go up it. Soon, the player will see some troops near the junk on the sides of the road. Take them out, then move forward until the player sees a ton of troops behind and in front of a roadblock. Take them out from the right side of the street, but be careful, because the troops tend to toss a lot of grenades here. When there are one or two troops left, go into the house on the left.

At the end of the house are two troops behind a table, so toss a grenade at them upon arriving in the last room.

From the last room, start firing at the troops on the left and across the street. Usually, their grenades will not make it into the house, so do not worry about them. Just focus on getting toe troops to a very small amount. When there are around two or three running around, get out of the house and take a left.

Start going up the road, but when the player gets near the end, they will be attacked by troops. Stay back and take out the ones in the immediate area, then move up. At the top, the player will see a ruined house with around four troops in it, in addition to some coming from the right. There's also a MG42 at a faraway house. Start off by taking out the troops in the house, then focus on whomever is coming from the right. Remember to stay behind cover, as the player will get killed if they do not.

When the area is clear, go to the area the troops were coming from, and the player will find another gun. Before attacking it, take out the MG42 gunner in the faraway house. Once he locks onto the player, he will them. Since the player has the high ground, it should be relatively easy taking out the troops at the gun. When there are a few left, run in and finish them off.

Firing from the house

the top of the street

The gunner in the distance

Getting to the third gun

After taking out Gun 3, go into the damaged home to the right of the gun and go through it. At the end, the player will be on a street filled with junk. Go to the right of the street, and there will be three troops hiding behind some junk. Get back to the other side of the street and pick them off from the junk. When they are out quickly run past the junk they were hiding behind, or three more troops will spawn in. Run to the crates on the left, and take out the troops hiding behind the junk there. After those troops are dead, move to the crate on the right and take out the troops. Some of them like to hide behind the car, so the player might need to flush them out with a grenade.

After clearing out all of the troops, go past the ruined wall and into the graveyard. When the player gets inside, turn left and start walking until seeing troops. When the player does, crouch and start taking them out form behind a grave. When there is a lull of troops, move up and the player will see the fourth gun. Keep taking out the troops and advancing until there are very few left. When there are, run up to the gun and finish off anybody that's left.

Advancing toward the 4th Gun

The first part of the street

The second part of the street

The third part of the street

Now it's time for the last gun. From the fourth gun, turn and walk left until encountering a hole that leads to a church. Go in it and there will be some troops on the other side hiding behind a wall. Toss a grenade to flush them out, then run up to the church's door and begin firing at the troops at the nearby street, running back to the door when hurt. There is an MG42 there, but the gunner will keep respawning until the player gets closer. Keep firing until there are few troops in the street and none operating the MG42. When that occurs, run into the street and look to the left. The player should see a doorway there. Run into it and open fire on the troops inside. Toss a grenade into the next room and open fire while the troops are running. When both rooms are cleared out, go outside and go to the right of the gun. The player will see a doorway. Go in and follow it to the end.

At the end of the house, town square will become visible. The last gun is on the other side, and troops are hiding behind the walls, so stay back and open fire until they begin to move back. When they do, go outside and run to the right, then start advancing towards the gun while picking off troops.

The street before the last gun

Town square. The gun is on the opposite end

When the last troop is down, two large tanks will burst through walls on the left and right sides of the gun, along with a ton of troop cronies. Since the player is on the right side, they will be near the gun when it breaks through. Run up to it and place a bomb on it, then run to the left to get the next tank.

The tank will start going towards gun 3, but it's pretty slow. The real problem are the troops that follow the tank. As the player is chasing the tank, the troops will be taking potshots at them. If the player stays back to fight, the tank will get away and they will respawn after a time. The best way to get away from them is shoot them while walking away, then toss a grenade when the magazine runs out so that the rest run away. In addition, there will be troops where there previously were not any, such as at the ruined house near gun 3, so be alert.

When the player destroys the last tank, take out the remaining troops, then go back to the graveyard and exit the level.

If this seems too challenging, there is another way. Once the tanks arrived, retreat back to the house across the square from the tanks. Exit from back and then get to the second floor of the house across the street. Germans will start pouring into the street in front of the player from left followed by one of the tank, kill the Germans, jump out of the window, plant the explosive, rush back to where the player was. Now, exit the house, go left until reaching another street, look right, the player will see the other tank. At the this point, the tank will start rolling towards the player, as well as some Germans. Use the broken car in the middle of the road as cover, pick off the German that are charging, pay attention to the tank. Once the tank start making a left turn, rush to it and plant the explosive, rush back.

The left tank heading towards the area before gun 3