Capture and hold the crossroads

"Crossroads" is the second campaign mission in Call of Duty: United Offensive.

At 0219 hrs, the mission starts off with the player starting off in a U.S. tent being greeted to Sergeant Ramirez and Sergeant Jones, and continue their plan against the Germans. Captain Foley dismisses the group and the player with their squad move outside.

Soon as the player is marching out of the camp the player's squad is attacked by Germans and a soldier is hit by the fire, resulting in Sergeant Moody to get the soldier. After the force has been wiped out the player is told with his squad to clear out the rest of the German encampment.

When walking Private Goldberg appears and debriefs Moody on the German situation at the encampment. Soon while stealthily trying to reach the encampment the Germans deploy flares to spot out the player's squad, and soon Moody and the player dash to the right of the treeline.

Once the encampment is destroyed the player and his squad decide to go inside the house next to the encampment to wipe out the remaining Germans. After clearing out the house, the player's squad finds a German Officer that is surrendering and decide to question the officer about the missing patrol. The officer claims he doesn't know about the missing patrol then Private Denny smacks him with the butt of his weapon and continue to question him. The officer tells the player that the patrol is out back of the house, and as the officer is walking out of the room, he screams outside a window telling the Germans to go to the barn where the missing patrol is before being knocked out with a rifle, if not killed.

Moody tells his squad to rush to the barn. Once the German attacks are stopped the player goes inside the barn to find the mising patrol alive, and on the ground. Moody tells the squad to get a medic while the rest goes to the crossroads to help support Ramirez.

Once the player and their squad gets to Ramirez they find him fighting off German fire. Moody instructs the player to help Ramirez by taking out the bunker that's got him pinned down. Once the Germans are killed, Moody tells Ramirez to hold down the fort while the rest of the squad cuts them off they get to the fort.

Once the player kills the remaining Germans and the Panzer, Moody will tell his squad good job, and tell them to go back to the crossroads. The mission ends when Captain Foley appears with U.S. Tanks and tells Moody and his squad good job and will take it from here. 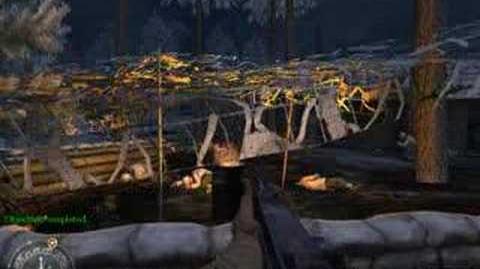 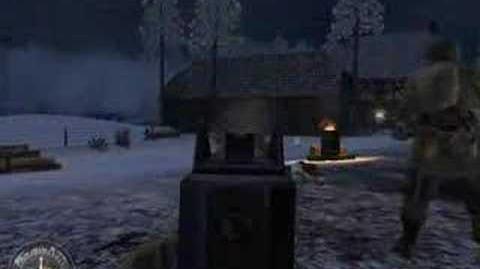 Retrieved from "https://callofduty.fandom.com/wiki/Crossroads_(United_Offensive)?oldid=2503367"
Community content is available under CC-BY-SA unless otherwise noted.