Call of Duty Wiki
Register
Don't have an account?
Sign In
Advertisement
in: Call of Duty 2: Big Red One Single Player Levels, Stub

An Easy Detail (in-game)
We've Been Through Worse (chronologically)

Crucifix Hill is the twelfth campaign mission in Call of Duty 2: Big Red One.

The level starts with the player and some of the squad on a boat heading towards land through heavy shelling of the river.

The boat reaches land in one piece and the occupants disembark. They move up the path to the cemetery, killing enemies on the way. A nearby sergeant is killed by a mortar round. The squad exits the cemetery and is tasked with fighting through the trenches and destroying three Flak Vierlings. The player destroys the AA guns and is then tasked with assaulting the communications bunker. The squad breaches and clears the bunker. They are then sent back out through the trenches to assault the command bunker and destroy the three Nebelwerfers. The squad is then regrouped with Lt. Hubert and they are debriefed. 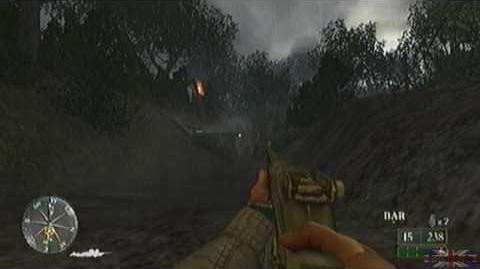