Cryofreeze is an alternate Pack-a-Punch ammo-type found in Call of Duty: Black Ops 4 and an Ammo Mod in Call of Duty: Black Ops Cold War, and it has a chance to be applied to an upgraded weapon when placed in the Pack-A-Punch Machine again. It costs 2500 points initially, but lowers to 1500 after upgrading your weapon 4 times. In Black Ops Cold War, it costs 2000 points and is freely available to the player without needing the weapon to be upgraded.

Cryofreeze ammo often slows down zombies with an ice effect, similar to Winter's Wail but much less powerful. On occasion, Cryofreeze ammo will cause an icy explosion, eliminating most zombies in its vicinity. Cryofreeze ammo is super effective against Poison Catalyst zombies, causing them to explode in a high-velocity blast.

Cryofreeze can be equipped to any weapon at the Pack-A-Punch machine for 2000 essence. The Cryofreeze effect can also be obtained by hitting a zombie while Elemental Pop is used. Cryofreeze has a chance to activate on any hit given to a zombie, at which point the zombie will be slowed down by 30% (50% if upgraded to Tier III) of its run speed for 3 seconds (5 seconds if upgraded to at least Tier II). The Ammo mod then enters a 1 second (0.8 second with a Tier II Elemental Pop) cooldown before being able to be activated again. The slowed zombie will have a visual icy effect on them, and will be hidden from the AN/PVS-4 Thermal and Noch Sova Thermal scopes.

Starting at Level 23, players can upgrade Cryofreeze's effects with the use of Aetherium Crystals. 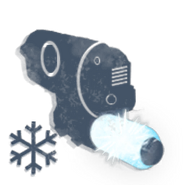 The Cyrofreeze icon within the Pack-a-Punch Machine menu.