For a map with a similar name, see Resistance.

October 6, 2016 (locally, in response to Russia's campaign against Europe during World War III)

The Czech Resistance is an allied faction that appeared in the Call of Duty: Modern Warfare 3 campaign. Given its identity, this faction was formed when the Ultranationalist government under Makarov's influence switched tactics to conquer Europe, especially Czechia. The Resistance was formed mostly of the country's local civilians, who attempt to fight back and repel the Russian invasion, but they take heavy losses against Russia's vehicles and from their lack of anti-vehicle weapons.

The resistance helped Task Force 141 and Loyalists to hunt Makarov in their country. They were first encountered in the mission "Eye of The Storm", where they help badly wounded civilians and resistance members. They helped Price, Yuri and Soap (who was badly injured) by defending them from Ultranationalist attack during "Blood Brothers". They also appear as civilians in the Spec Ops mission Resistance Movement.

Molotov Cocktail
Add a photo to this gallery 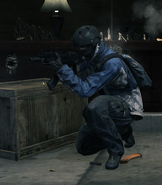 Resistance fighter with AK-74u. Note the orange magazine on the ground, possibly being reused from Call of Duty 4: Modern Warfare. 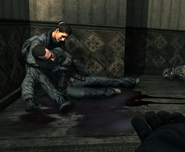 One possible look for a randomly generated Resistance Leader.

Resistance members run away from a BTR-80. 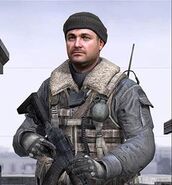 Russian loyalist Kamarov, the only named member of the Resistance. 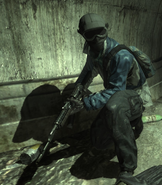 A resistance member in the sewers.

Retrieved from "https://callofduty.fandom.com/wiki/Czech_Resistance?oldid=2492172"
Community content is available under CC-BY-SA unless otherwise noted.