Call of Duty Wiki
Register
Don't have an account?
Sign In
Advertisement
in: Pages with broken file links, Call of Duty: Infinite Warfare Shotguns, Articles to be expanded

The DCM-8 is an energy fully-automatic shotgun featured in Call of Duty: Infinite Warfare.

When all side missions are completed, the DCM-8 unlocks the Advanced DCM-8 upgrade, which tightens the pellet spread.

The upgrade appears in the game's multiplayer as the Epic gun perk Focus Fire.

The DCM-8 is unlocked at level 29. It is the third shotgun unlocked. It features the integrated High-Capacity Power Cell attachment, which allows the DCM-8 to have a fully automatic fire rate.

The DCM-8 is the second lowest of the shotguns in terms of upfront damage, ahead of the Reaver but it has far worse damage range putting it at a notable disadvantage compared to other shotguns. The rate of fire is comparable to the semi-automatic Reaver but being an energy weapon, the DCM-8 lacks the ability to run Extended Mag, instead relying on Fusion Mag. Running Scavenger or weapon variants with Stockpile or Lifelink can be highly beneficial to a DCM-8 user.

The epic Masochist variant is extremely powerful as the Lifelink gun perk functions like it's pre-patched muliplayer counterpart, granting the user infinite ammo at the expense of draining the user's health when firing. The Masochist cannot kill the user as it stops dealing self-damage at 1% health, meaning the weapon is very dangerous to use when engaging hordes of zombies out in the open, even with Tuff 'Nuff. The Masochist is best used as a camping weapon as a result, since the user can simply sit with their back to a wall and funnel zombies into a tight choke point, and just hold the trigger down indefinitely. The user should be weary of the gun's tendancy to create crawlers in later rounds however.

The DCM-8 in first person 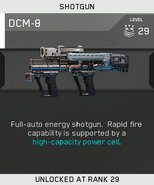 The DCM-8 being unlocked in multiplayer 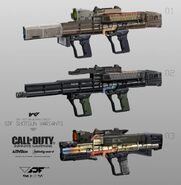