The DMR-1 (known as DMR-M1 in early builds, and as M1 in the game files) is a sniper rifle that appears in Call of Duty: Infinite Warfare. It resembles an M1 Garand which has been adapted for use as a marksman rifle by the addition of a lengthened barrel and an offset scope. It can also be reloaded mid-magazine, unlike the M1. Upon close inspection, one can see a flaw in the wooden stock under the rear sight, possibly a knot in the tree the stock was carved from, but more likely a crack from extended periods of use by soldiers with enhanced strength due to their combat rigs.

In singleplayer, the DMR-1 becomes available for use after completing the campaign on Specialist difficulty. It uses the skin and description of the M1 classic weapon from multiplayer, and has no attachments available.

The DMR-1 is unlocked at level 44. it is the last sniper rifle to be unlocked.

The DMR-1 has undergone many updates, often relating to its ADS time. The March 10th, 2017 patch decreased the ADS time of the DMR-1 slightly.[1]

The Spectacle variant comes with a unique Reflex Sight that has an in-built Tracking Chip, making it very similar to the Trojan sight. Previously it had the same ADS as a scope but has since been patched to be in line with normal Reflex ADS time. The Spectacle also has the Focus gun perk, reducing idle sway.

The Dart variant is comparable to the Spectacle in that it comes with an in-built sight, the Scout. It does not come with a tracking chip, however. The main perk of the weapon is the Assassin Build which integrates a Silencer that also does not reveal killed target locations. Strangely, the weapon model shows a Reflex Sight integrated onto the weapon no matter what loadout is chosen and is likely a mistake from reusing the Spectacle variant model.

When Pack-a-Punched, it becomes the Black Widow when upgraded and gains a bullet-seeking effect when hip-firing.[3] The EMC also gains this effect after upgrading. 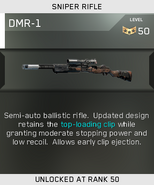 The DMR-1 being unlocked in multiplayer

The DMR-1 in first person 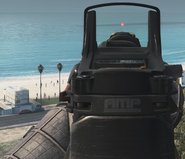 Aiming down the built-in Reflex Sight of the Spectacle variant