The Degtyarev DP-28, also known as the DP27, is a Russian light machine gun that appears in most of the Russian World War II campaigns in the Call of Duty series. It can be easily identified by its unusual pan magazine and the distinctive stuttering sound it makes when firing.

In Call of Duty: United Offensive, the Degtyarev DP28 weapon is the Soviet light machine gun and support weapon of choice. It has high damage and accuracy, a relatively high ammo capacity but a slow rate of fire. It can deal one-shot kills at any range with headshots, or three bodyshots, but tends to be very rare, and ammo is very scarce.

The DP-28 is issued to the Soviet team, and is their medium between a light machine gun and a support weapon. It can deal a one-shot kill if aimed at the head or two shots to the body at close to medium to long range, but beyond that, it takes two shots to the head to kill, or five to the body . Its small magazine and long reload time (longer than the other light machine guns) can prove to be a problem, as the user will find themselves reloading often and spending much of their time reloading. However, its recoil is low and easy to control.

"An extremely simple and reliable weapon, the DPM is a gas operated air-cooled machine gun. It is most effectively used with its bipod deployed, and can lay down an impressive barrage of fire."
— Manual description

The DPM (sometimes simply referred to as "DP") appears in Call of Duty: Finest Hour. It can be found in most of the Russian missions, particularly when playing as Nikolai Badanov. The DPM is more or less the same as the Call of Duty: United Offensive variant - it has a 47-round pan magazine and a slow rate of fire, making it more controllable than other machine guns, and boasts high accuracy and damage. A new feature, however, as with many Call of Duty: Finest Hour machine guns, is the bipod, which inhibits the guns movement, but makes it much more accurate when prone.

The DP-28 is only available in multiplayer, where it is unlocked at level 13.

The DP-28's accuracy is somewhat poor. The iron sights are relatively clean, although the pan magazine will obscure the bottom portion of the user's peripheral view, and the recoil per shot is very heavy, with the gun kicking heavily to the sides and upwards. Thankfully, the DP-28 has a very high centerspeed value of 2258 to try to combat the recoil profile. The DP-28 remains relatively accurate at medium ranges despite the heavy recoil per shot.

The DP-28 has average handling traits for an MG. The DP-28 allows users to move at 87.5% of the base movement speed and strafe at 35% of the base movement speed, both slowest in-tier, but average for an MG. The DP-28's hip-fire spread is an acceptable size that makes hip-fire somewhat reliable, and the aim down sight time is the standard MG aim down sight time of 350 milliseconds. The DP-28's reload speeds are also acceptable. The DP-28 reloads in 3.3 seconds by default, or 4.5 seconds if the magazine is empty. In either case, a Reload Cancel can be performed after 2.25 seconds. This is one of the slower reload speeds in its class, but it's more than manageable. The DP-28 has large magazines and a slow fire rate, meaning that the user will reload very rarely.

The DP-28 has the third largest capacity in the MG class, with each pan-shaped magazine holding 47 rounds. Oddly, the DP-28 is the only MG that gets only one spare magazine by default, meaning the starting ammo loadout is only 94 rounds large. This is still slightly above average for an MG, but a far cry from the likes of the MG42 and the M1919 Browning, which it has comparable capacity to.

The DP-28 only has one attachment on offer: the Bipod. When the bipod is deployed, the user no longer has to deal with recoil, which can help make the DP-28 much more controllable over longer sightlines. Outside of a long range support role, this attachment doesn't see much purpose. Thankfully there's no disadvantage to using the Bipod, so players may as well have it equipped.

A Marine reloads a DP-28 in multiplayer 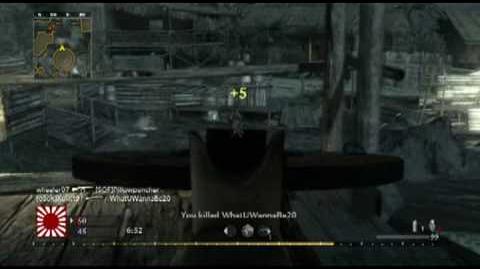 "Versatile LMG capable of full-auto accuracy up to medium range and accurate in burst at long range."
— In-game description

The weapon returns in Call of Duty: Vanguard as the DP27.

The DP27 can be brought into any map via Create-A-Class, at Loadout rarity and can be found at any rarity via the Mystery Box for 950 Essence.When upgraded via the Pack-a-Punch Machine, it becomes the Dinner Plate 2700.