The DShK is first seen being used by the Cuban guards of Castro against Alex Mason and his team in the level, "Operation 40". It is frequently seen in "Vorkuta", mounted on the back of trucks manned by prison guards. After jumping from his motorcycle to one of these trucks, Mason uses a DShK to fire at enemy motorcycles, trucks, and Mi-8 helicopters. During "Executive Order", the DShK is seen mounted on trucks, but never usable. During "WMD", Hudson and his team use a similar truck, with Hudson using the mounted DShK to provide cover while the truck is started. 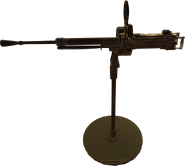 A Cuban guard manning the DShK.

The DShK in "WMD".
Add a photo to this gallery

The DShK appears in Call of Duty: Modern Warfare 3, mounted on the top of a T-90 MBT in Berlin. It can also be seen mounted on a tripod and used as a stationary weapon by enemies in the mission "Persona Non Grata".

As for Spec Ops, players in Juggernaut suits will be attacked by this weapon mounted on a vehicle turret in Toxic Paradise, and the weapon can be found and used as an emplacement in the DLC mission Negotiator.

A DShK mounted on a Remote Sentry.

Frost mans a DShK during the mission "Iron Lady".

A DsHK mounted on a GAZ.

Another DShK in "Iron Lady" with a Minigun pick-up icon.
Add a photo to this gallery

The DShK is mounted on the transport barges and the buffels in "Pyrrhic Victory".

Icon.
Add a photo to this gallery

The DShK is mounted on Federation GAZ-2975 trucks in some missions.

A DShk is seen in "Traffic", right before breaching a room to rescue Samuel Abidoyo. It's also used by an enemy on the top of a truck in "Fission".

The DShK in "Traffic"
Add a photo to this gallery

Retrieved from "https://callofduty.fandom.com/wiki/DShK?oldid=2415764"
Community content is available under CC-BY-SA unless otherwise noted.