M1 Garand, any weapon obtained by the player

"Soldiers of honor have a rule. No one gets left behind. But for Daniel Take Yatsu, it's not just a rule. It's the rule. No matter how fierce the enemy, how overwhelming the numbers, how dark the day, he's here to make good on a promise. And bring everyone home."
— Carver Butcher

Daniel Take Yatsu was born in 1923 to two Japanese immigrants who ran an auto shop in Los Angeles. Following the attack on Pearl Harbor, the United States government took away Yatsu's family home and business. While his family was incarcerated in the Manzanar[3] concentration camp, Yatsu was drafted into service and was deployed as a sniper in Italy as part of the 442nd Infantry Regiment.

Daniel with the Pack-A-Punch Camouflage.

Daniel as seen in Season Two.

Daniel as seen in Season Three. 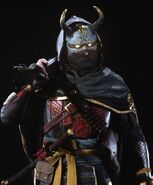 Daniel as seen during Season Four.