Danny Li is a character first featured in Call of Duty: Black Ops III. A member of the 54 Immortals, he served as one of the group's weapons dealers, and is a former associate of Winslow Accord Agent Jacob Hendricks. Danny Li appears in "Provocation", as well as in the multiplayer mode as the Black Market vendor Blackjack. As Blackjack, Li operates the Black Market, selling weapons, taunts, camouflages and other items to players in exchange for Cryptokeys or CODPoints.

Danny Li was in a meeting with John Taylor and Hendricks, who pretend to be former agents turned arms dealers. Wanting to sell Li supplies, he agrees before stabbing one of his associates with a knife for making a mistake. Li is neutralized by Grunts, alongside Goh Min, as Goh Xiulan escapes with the servers.

Unbeknownst to both Taylor and Hendricks, Li managed to survive thanks to the usage of a recently acquired Rejack unit. His life was spared by 54i enforcer He "Seraph" Zhen-Zhen, who deemed that the organization had suffered too many losses already, with the deaths of their leaders being the latest. Thus, Li resorted to working as a mercenary, going by his new name "Blackjack" to restore his reputation.

Due to his encounter with Taylor, Li would end up appearing in the Player's dream simulation, playing out the same role he did years before, only with the Player replacing Taylor.

"That's all you get... for today. Now make up your mind before I start charging rent."
— Blackjack

In addition, each week there is one "side bet" that the player can complete to earn an exclusive calling card.

Blackjack appears in Call of Duty: Mobile and was added on August 31, 2021, during Season 7: Elite of the Elite as part of the Ignition Point Draw. [1]

"Once a well-connected 54I fixer, Danny Li narrowly survived a disastrous meeting that he brokered between Winslow Accord agents and the organization's leaders through the use of a recently acquired Rejack unit.

Deeming that they had suffered too many losses already, the enforcer, Seraph decided not to execute him for his part in the deaths of Min and Xuilan Goh, stating that they needed all of their remaining strength in order to rebuild.

Blackjack now operates as a mercenary, restoring his reputation, and bringing glory to the clan; all the while salvaging up new stock from the spoils on the battlefield.
"
— Blackjack's biography in Black Ops 3

"You like what you see? This... is the Black Market. I'm the only vendor left that can hook you up with the new contraband. Check out these new items that I've scavenged."
— In the first Black Market Update Trailer.

"What? You looking for a... handout?"
— When the player visits the Black Market with insufficient Cryptokeys or CoD Points.

"You think that's all I've got? You're not even close. I've always got the good shit."
— In the first Black Market update trailer

"Hey. Customers only. You here to buy... or for chit-chat? Because my new crowbar is great at small talk."
— In the 2/9 Black Market Trailer.

"For me, this semi-automatic crossbow. Mmmm... I like. It's silent, so people can't find you. Which is nice because... I don't like people."
— In the 2/9 Black Market Trailer.

"And if some chump feels the need to get close, there's the buckshot handcannon. It's like a warm hug, but the opposite."
— In the 2/9 Black Market Trailer.

"Back for more? You made it here so you must be doing well for yourself. What a surprise. Well then, let's see the goods."
— In the 3/22 Black Market Trailer.

"The Carver. You can pretend it's Thanksgiving or not. A plump juicy turkey right around."
— In the 3/22 Black Market Trailer.

"Bolt action RSA Interdiction sniper rifle. For mobile sharpshooters, not campers. Your hiding fools no one."
— In the 3/22 Black Market Trailer.

"The Malice dagger... It's wavy, which incidentally is how I prefer my potato chips."
— In the 3/22 Black Market Trailer.

"And for my showboating assassins, all new ways to gloat. You're welcome."
— In the 3/22 Black Market Trailer.

"Yo. I can sense an empty wallet from a mile away."
— When opening Blackjack's Shop without enough CoD Points for a purchase/without any cases to open.

Blackjack in a pre-alpha build of Black Ops 4. 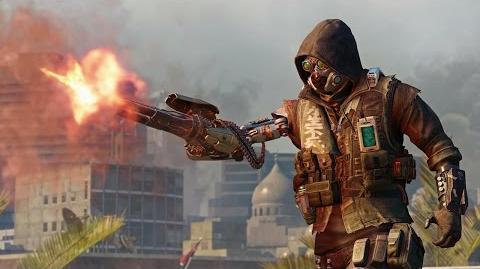