For other characters, see Danny.

Purging of the Multiverse

Dual Wield Machetes, M1911, any weapon obtained by the player in Call of the Dead.

Call of the Dead
Blackout

"You just messed with the wrong Mexican!"
— Danny in the Call of the Dead reveal trailer.

Danny Trejo slashing a Zombie's head off with one of his Machetes.

Danny Trejo stabbing a Zombie with a Machete. 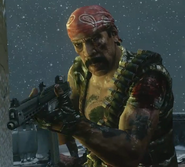 Danny Trejo with Michael Rooker and Robert Englund.
Add a photo to this gallery

Retrieved from "https://callofduty.fandom.com/wiki/Danny_Trejo?oldid=2493825"
Community content is available under CC-BY-SA unless otherwise noted.