"A controlled scorestreak that flies around the map. It can engage enemies by targeting them with rockets."
— Description

If a Dart hits a surface or an enemy, it will explode. The explosion does not get more powerful if the Dart still has rockets that it has not fired. The Dart does significant collision damage when it hits a surface, allowing it to do additional damage to scorestreaks. A Dart can instantly destroy a Wraith, and is ignored by the supporting flak drone. A player that has Flak Jacket will survive the explosion from a Dart missile, but if they are hit directly with the Dart, the explosion and ram damage combined will be enough to eliminate them.

HUD of the Dart. 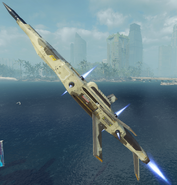 "Pilot an anti-personnel drone. Remote detonate the drone with <key> or detonate on impact."
— Description

The Dart returns in Call of Duty: Black Ops 4. Similar to Black Ops III, the Dart is a controlled drone that explodes on impact. It can be destroyed during flight by enemy players.