Survive for as long as possible against limitless waves of zombies

Dead Ops Arcade is a twin-stick top-down shooter, and, similar to all other zombie levels, its objective is to survive for as many rounds as possible against many waves of increasingly difficult zombies. It contains many references to the zombie mode in Call of Duty: Black Ops and Call of Duty: World at War; however, the gameplay has almost nothing in common. Ammo is of no concern, as the player's main weapon has unlimited ammo and never needs to be reloaded. The player can also pick up a large number of weapons and power-ups in order to assist them throughout the levels.

The player begins the game with three lives and once the player loses all of their lives the game is over (though there are ways to gain extra lives). The player can die from one hit from all zombies, three hits from Hellhounds and explosives or instantly from other contextual factors such as Bulls or Electric Spikes. Whilst playing cooperatively, if a player loses all their lives they will enter revive mode in which they will respawn in one minute and thirty seconds provided at least one other player is alive at the time. Any downed player timers will automatically expire when entering a new round. However, if another player on the team has at least one life then the player will automatically be gifted that life to be revived instantly. This grants the player who gave the life a random power-up (either a tank, a helicopter, three nukes or four lightning bolts) and this can be done multiple times per round provided the player waits 90 seconds in between lives stolen.

Most of the music in the maps are shared with the loading screen music of the Call of Duty: World at War maps, notably Shi No Numa's music being shared with the Room of Fate's. Others are played throughout gameplay.

Here is a brief overview of all the levels the player will encounter whilst playing Dead Ops Arcade. Once at the last round of each set of levels, the player will step on a teleporter to transport to the next area. The individual rounds within the levels are all very similar to each other, usually either being a reflection of the other levels or, later on, different weathers that can obscure the player's vision. Here is the list of levels:

These are all items that will aid the player against the zombies in one way or the other; these items appear with a green or yellow tint on the map for a limited amount of time to be picked up by the player. The associated duration for each item is doubled if the player is awarded the "Fate of Fortitude".

These are general objects or creatures found at specific rounds that are not considered enemies. They can prove to be a hindrance for the player (as most are fatal to the player), however, if skilled enough, the player may turn these objects into an advantage by luring enemies towards them, killing the enemies instead. They are as follows:

The Room of Fate

Between rounds 13 and 16, the player will enter The Room of Fate which will grant one of four different permanent Fates - or power ups - to the player for the rest of the game. Regardless of how many players are in the game, each player will receive one Fate each. The Fates are as follows:

The Bonus Room is a room which grants the player(s) four piles of treasure. This room is found by choosing the correct path, however, these rooms are located differently each game so there is no specific path the player can take. The treasure largely consists of the general treasure found throughout the game but also may consist of gems to very largely increase the player's multiplier. Two to three weapons and/or power ups may also be found in this room. This room does not count towards a round in terms of the leaderboards.

The Armory is another kind of bonus room which grants all players random guns and power ups to pick up rather than treasure. These rooms are found by choosing the correct path, however, there is no specific path to take as these rooms are located differently each game. The bonuses include, but are not limited to, bombs, dashes, chickens and vehicles. The Armory, like the Bonus Room, does not count as a round in terms of the leaderboard.

It is found by breaking free of the chair in the main menu, by holding the Space Bar on the PC, LT and RT on Xbox 360, L2 and R2 on PS3, but on the Wii the player must shake the nunchuck and Wii remote repeatedly. The player must then locate a computer which holds the Central Intelligence Agency Data system. The game is accessed by using the keyboard on the computer (against the wall behind the torture chair) and typing "DOA".

After accessing DOA for the first time, it can be found on the list of Zombies maps and can be played anytime online. The player can also type in the cheat 3ARC UNLOCK, which also unlocks all single player missions and "Five".

This map is also available for the Call of Duty: Black Ops Zombies iPhone/iPod/Android app but in order to unlock it, the player must find all of the coins hidden in various parts of the Main Menu. 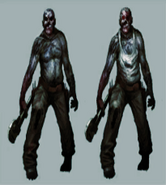 Another view of the undead engineer. 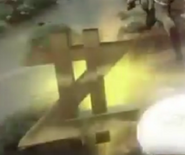 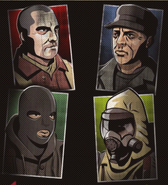 The four playable characters as seen in Call of Duty: Black Ops Zombies.

The location of the 1st coin in the Player Profile menu. It's below the statistics.

The location of the 2nd coin in the Co-op Multiplayer menu. It's in the man's hand who is about to insert a coin.

The location of the 3rd coin in the Extras menu. It's on a crate, being pointed to by the man seen in Nacht der Untoten's menu.

The location of the 4th coin in the More Apps menu. It's below the hand of the zombie who's reaching through a barrier. 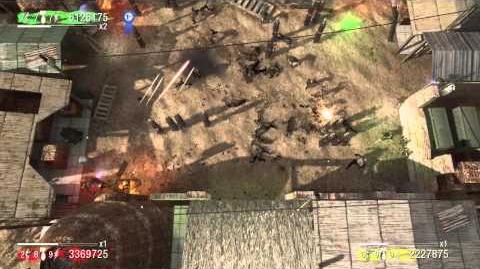 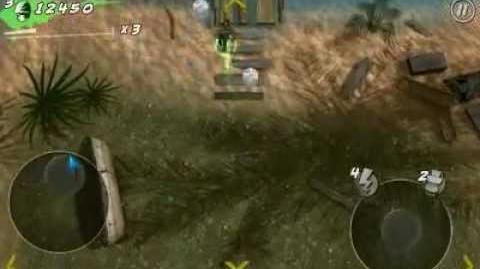