The Dead Wire effect will affect up to nine zombies including the one on which the effect was triggered, giving a maximum of nine kills per activation, just one kill below the Wunderwaffe DG-2. It is also capable of killing zombies forever due to its infinite damage. Affected zombies are incapacitated instantly before they die, making Dead Wire more likely to save the player from being cornered than the other upgrades, such as Blast Furnace, which takes several seconds to kill affected zombies. When Dead Wire triggers on a group of zombies larger than nine, it will effect all of them but only killing nine of them with the rest simply being stunned before returning to normal. Electric Cherry effect is ignored when Dead Wire chains to a zombie effected by it.

In addition, this effect appears to activate more frequently than the other Pack-a-Punch upgrades, and will consistently trigger on the first bullet fired after the previous Dead Wire effect has ended.

Because of Dead Wire's positive features, Dead Wire is a very effective Pack-a-Punch upgrade. It is also arguably the best for high rounds, especially if it is used on a wall weapon so that ammunition is in constant supply.

The amount of points you gain per kill with Dead Wire is 50 per shocked zombie, and the effect of Dead Wire occurs more often, making it reliable for taking out small trains of 10 zombies (if one causes a chain reaction).

Dead Wire returns as an Ammo Mod in Call of Duty: Black Ops Cold War which can be applied at the Pack-a-Punch machine for 2000 essences. Unlike its Black Ops 3 equivalent, the ammo mod does not chain between zombies, instead it will stun a single one and release an area of electric damage around itself (if the player has it upgraded to at least tier I). The area of electric damage will hurt surrounding zombies every second for the duration of the stun. Should the stunned zombie's health reach 0 during the stun, it will not die until the effect is over or the player hurts it with another weapon. The duration of the stun depends on the tier of the ammo mod (2 seconds for tier 0-1 and 4 seconds for tier 2-3).

The Dead Wire ammo mod has a cooldown of 15 seconds, which can be reduced to 12 seconds by using a Tier II Elemental Pop perk.

Using a weapon with Dead Wire ammo also gives a 1.5x electrical damage multiplier against Megaton units, it will however not trigger the effects.

A weapon equipped with Dead Wire is required to complete the Satellite sub-quest in Die Maschine.

Although this Ammo mod shares the same name as the Dead Wire upgrade in Black Ops 3, its effect is actually more similar to the Kill-O-Watt alternate Pack-a-Punch ammo-type from Call of Duty: Black Ops 4.

Starting at Level 11, players can upgrade Dead wire's effects with the use of Aetherium Crystals.

Dead Wire returns in Call of Duty: Vanguard as a Covenant as part of Season Two. It can be purchased for 1 Sacrificial Heart used at the Altar of Covenants

An example of Dead Wire's effects in Call of Duty: Black Ops III. 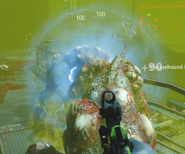 Plaguehound being affected by Dead Wire 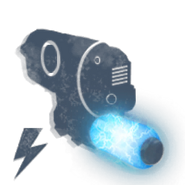 The Dead Wire icon within the Pack-a-Punch Machine menu.
Community content is available under CC-BY-SA unless otherwise noted.
Advertisement