Dead for a Day

"Riley was his name. Simon Riley. He was one of the S.A.S. boys. Some say they were the tops and Riley... he was the best of them."
— The man remembering his old friend.

Dead for a Day is the first comic book in the Modern Warfare 2: Ghost series published by Wildstorm Productions as a companion to the main series game Call of Duty: Modern Warfare 2, which was released in the same year.

A man wearing a skull balaclava tries to infiltrate a Basic School in Lisichansk, Ukraine where Russian terrorists are taking the students hostage but gets caught. Instead of being killed on the spot, he is brought into a classroom where the children are kept hostage. The terrorists are angered by the fact that only one man was sent to relieve the kids instead of a squad and promise to shoot a child come three o' clock so that they will be taken seriously. While they wait, the man notices the others staring at his mask, and begins to explain that it is a "tribute to an old friend," Simon "Ghost" Riley. The man starts to tell a story that took place a few years ago.

There used to be a Mexican named Manuel "El Gordo" Roba, the C.E.O. of the Zaragoza Drug Cartel which made a fortune on piping Afghan heroin to the United States. Roba was expanding into terrorist smuggling, which was enough to make him a high-level threat. Two teams were sent to take him down, but both efforts ended with disastrous results. All of the members of the last team were killed saving the leader, Major Vernon.

Major Vernon assembles another team comprising of Riley, Sparks, Cumberland, Washington and Sykes. After a roll call, they climb into a transport helicopter and set off for Coahuilla, Mexico.

Once the team arrives over an isolated spot near Boy's Town, Nuevo Laredo, they jump off and open their parachutes. But Sykes' parachute fails to open and he falls to his death. The team gathers around the corpse and suspect some sabotage since Sykes was constantly making sure his chute would work. Vernon vetoes it as just an accident to prevent any accusations on who the "rat" is and orders them to move into a hotel while they can still blend in.

Inside the hotel, Washington expresses his doubts in their blending in while the others look forward to visiting a bar that night. Outside, Vernon and Riley plan their infiltration into Roba's estate where a festival will be held the night before the Day of the Dead. Vernon requests that Riley keep a close eye on the team while they visit Boys Town and while Vernon does recon on Roba's place. Vernon emphasizes a closer eye on Cumberland as he was a last minute replacement when he was assembling the team.

At Boy's Town, the team share their past experiences. Sparks shares that his father fought in Vietnam but is using that as an excuse to laze around. After a little pressing, Riley admits that he was just an apprentice butcher at a grocery, until Nine Eleven happened, after which he joined the military and was skilled enough to get into the S.A.S. All those present are surprised at how generic his past is. Cumberland suggests that they split up and meet back at the motel in the morning but Riley says it's too dangerous. Cumberland insists further and leaves after a prostitute approaches Riley but is followed by Washington and Sparks. Cumberland's persistence in being left alone arouses suspicion in Riley and he starts to follow Cumberland.

Riley watches as Cumberland deliberately gets Washington and Sparks drunk and busy with the prostitutes while he remains sober. As the two get intoxicated, Cumberland splits from the group and uses a payphone. A black van arrives and he climbs in, Riley follows them to a brothel where Cumberland meets his contact followed by several of Roba's men.

The next day, Riley meets Vernon to confirm the latter's suspicions on Cumberland and asks if they should abort the mission to deal with Cumberland. Vernon refuses as he is concerned due to seeing six jihadists at Roba's estate during his late-night recon.

That night, the team dress up appropriately and go to Roba's party. Vernon and Cumberland are missing, and as they approach the house, they witness Vernon being escorted by two guards into the house. Riley orders Sparks to set up a sniper position by the exit and Washington to plant C4 on the east wall of the house while he approaches the front doors.

Riley manages to approach the two guards stationed on the front doors by feigning a drunken state, where he brings out a knife on them. He grabs out his pistol and enters the house. Inside, everyone is too drunk to be alarmed by Riley's snooping around. Riley comes across a room where he finds Cumberland tied to his chair, his crotch bleeding profusely. Riley rushes to his aid, grabbing a morphine shot for the pain. But before he is able to administer it, Vernon appears at the doorway and shoots Cumberland, and reveals that he was the one who sabotaged Sykes' pack and that Cumberland saw him and is sending a Delta Squad to capture Vernon at dawn.

Three of Roba's men arrive and are ordered by Vernon to cuff Riley. When one of the men reach for Riley's hands to put the handcuffs on, Riley uses the morphine shot to stab him in the hand. Riley disarms one of the guards and starts shooting at everyone in the room but Vernon manages to escape.

Riley chooses not to give chase and jumps out of the window. While he vaults over the south wall of the estate to escape into the jungle, he is shot from behind by Manuel Roba and falls back inside. Vernon approaches Riley's unconscious body and takes him back to be captured.

The terrorist and their hostages. 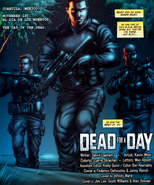 (From left to right) Sparks, Riley and Washington before they dress up for the festival.

Riley and Vernon talking in a car. 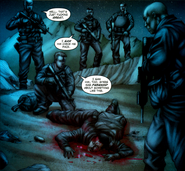 The Squad at the bar.

Riley using a knife to dispatch the guards at the front door of Roba's house.

Riley holding out his Browning Hi-Power.

Riley fighting back from being cuffed.

Riley shooting a Mini-Uzi.
Add a photo to this gallery

Retrieved from "https://callofduty.fandom.com/wiki/Dead_for_a_Day?oldid=2357890"
Community content is available under CC-BY-SA unless otherwise noted.