For the predecessor found in previous games, see Deadshot Daiquiri.

Deadshot Dealer, when purchased, will allow players to automatically aim for an enemy's head whilst "snapping" in and out of the sights. It also reduces the hipfire spread of a weapon while firing from the hip, as well as the weapon's overall recoil. The perk also removes scope sway from weapons such as sniper rifles and tactical rifles.

When Deadshot Dealer is selected as the "Modifier" perk and the player has all of their other perks, the player will receive a damage boost when the player earns consecutive headshot streaks, which is tracked by the perk icon, which will gain red bars. Once enough headshots are achieved, the crosshair in the perk's icon will begin pulsating red. 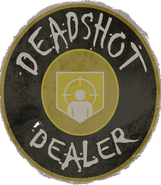 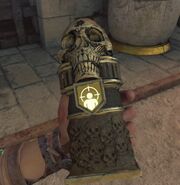 The model for the Deadshot Dealer statue.
Community content is available under CC-BY-SA unless otherwise noted.
Advertisement