Call of Duty Wiki
Register
Don't have an account?
Sign In
Advertisement
in: Call of Duty: Black Ops 4 Wonder Weapons

"Deadly arachnid from another dimension that has been turned into an energy weapon."
— Blackout Description

The Death of Orion is a wonder weapon featured in Call of Duty: Black Ops 4. It can be found on the map IX.

The Death of Orion is a multishot weapon, complete with 45 shots in reserve. Upon firing a shot, the weapon will immediately load the next shot, allowing the weapon to fired similarly to a semi-automatic weapon with a slow firing rate. The Death of Orion also has the option to fire a "capture beam", which can be achieved by charging the weapon by holding the firing button. Upon firing a charged shot at an enemy, the target will be ensnared by the shot, sending out bolts of electricity that can chain to nearby enemies.

When upgraded through the Pack-a-Punch Machine, it becomes the Serket's Kiss, giving the weapon increased damage and more ammo in reserve.

The player can obtain a guaranteed Death of Orion by completing a small easter egg.

After opening Pack-a-Punch, a wall in the hallway near the Danu-Ra Temple Entrance will break open, with a metal grate "window" becoming visible. The player can now shoot an urn of fire that is sitting on a pillar with any bullet firing weapon. This will send out a line of fire, which will form into an arrow on the surface, which is visible on the drawbridge between the Ra and Danu temples.

The player must now place the stone head under an Acid Trap, to which the player can build at certain locations. The player must activate the trap, causing the head to melt into a small scorpion spile. The player can now pick it up and head to the Danu temple's lowest level, where two trees will be. The player must knife the hole within the tree closest to the Mystery Box location in order to insert it, which will cause it to drain some sap.

The player must now acquire a golden canopic jar, which will be thrown into the arena after surviving a couple of rounds while the crowd affinity is maxed out in the positive rating. The Chaos Priest will comment "A gift from Serket." when the jar is thrown into the arena. With the jar, the player can place it under the leaking sap in the Danu temple causes by the previously acquired item, causing the jar to fill up. The player can soon grab the jar at the start of the next round.

The Death of Orion can be found in the Mystery Box or from killing the Blightfather in Blackout during the Operation Apocalypse Z event.

The Death of Orion seen in the first person view. 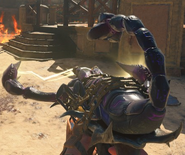