The Decoy appears in Call of Duty: Black Ops.

The Decoy is a grenade which, when thrown, simulates gunfire sounds and creates radar indicators - red dots on the enemy mini-map; similar green dots for friendlies. The grenade does do damage when it is going off if it touches a player.

The Decoy's gunfire sounds and patterns are random, although a lot of the time they simulate the sound of automatic Uzi and semi-automatic CZ75 gunfire. The grenade also bounces wildly on the ground, in order to simulate enemy movement. It eventually explodes, sending cartridges flying in several directions and discharging simultaneously, which appears on the map as players firing upon one another. The gunfire effects during the last few seconds are slower.

Decoys are very useful for setting up traps. For example, if a player sets up a claymore by a doorway, and then throws down a decoy, this will be a very easy way to get a kill.

Decoys are also a good way to draw the fight to a new section of the map. For example, if a player throws all of their Decoys into an area during a quiet or slow part of the match, it is almost guaranteed that both friendlies and enemies will rush to that area.

Decoys are also a good way to confuse the enemy. For example, if the player is wounded and surrounded, they can throw one or more Decoys to trick the enemies into thinking that they are under attack from a different area. As well, if the enemy has a Blackbird in the air, throwing a decoy makes another red arrow appear on the enemy's radar. Another trick like this is to take the Ghost perk (and preferably for player to add a suppressor on all weapons they have equipped) and throw decoys during Spy Planes. As the player will not appear on radar, but player's Decoy will, it is more likely to fool enemies.

Decoys are great in "bomb planting" game modes. Player can throw the decoy where the other bomb site is or an area far away from where the player is planting at. The other team will run there and the player freely plant the bomb without any problems. Player needs to be sure that they have the perk Ghost equipped, to avoid Spy Planes.

Another tactic with the Decoy grenades is to use a sniper rifle, and player should throw it somewhere on the map that the player is targeting, so the player can lure enemies into a kill-zone.

Veteran/ experienced players will unlikely be fooled by a Decoy, as the same sound effects for gunfire are used for every decoy. Attentive players will notice this over time, leading to it being less effective, or completely nullified; newer players might not understand what a decoy is, and fall the bait anyways. 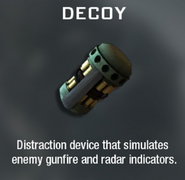 The Decoy Grenade in Create-A-Class. 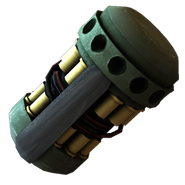 Render of the Decoy. 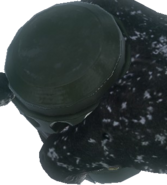