The Denizen, referred to in-game as Screecher, is an enemy featured in Call of Duty: Black Ops II, and only appears in TranZit. It only spawns in the fog and mist locations, and does not yield any points for being killed, nor does the Denizen drop a power-up on death.

It is revealed in the Zombies Timeline that they were created by Broken Arrow, as was the Avogadro.[1].

The Denizens have low health, and can be killed before they leap on a player. Their health when leaping does scale with that of the Zombies, at the same rate. When attached, the Denizen takes five knife attacks before it lets go, however it will be reduced to two hits with the Galvaknuckles or three with the Bowie Knife. It can be melee attacked or shot before latching if the player responds quickly enough, taking one well-timed attack from the Bowie Knife or Galvaknuckles or two rapid knife attacks to prevent it even getting on to the player. If a Denizen leaps on a player, they will not hurt the player directly like zombies but will instantly down the player if not meleed off in a small amount of time; having Juggernog does not extend this time. They can be killed by either another player shooting it or by hitting the melee button. A player with a Denizen mounted on them can still walk and evade zombies. Once jumped upon, the player will move slower and Stamin-Up's effect does not apply. If the player is on top of the bus, they will not attack, but objects in some different locations will knock the player off the bus if the player is not cautious. Like regular zombies, they are affected by Insta-Kill.

If a player steps out into the fog between bus stops, a Denizen will emerge from the ground, and start shrieking. They do not have an infinite range to leap on a player, and will attempt to run after the player before getting in range to jump on them. It has been noted that a Denizen will run back into the mist if the player returns to the clear air around the locations, also the Denizens will not go after Monkey Bombs; however, a Denizen will not be affected by the lack of fog if the player leaves the fog while it is leaping to them, thus allowing streetlights to be used to make portals. If a player with a Denizen latched onto their head runs under a green street light, the Denizen will jump off the player, and start to dig a hole underneath the streetlight. Once the Denizen is completely submerged under dirt, a portal will appear under the streetlight. The player can then jump through the portal and end up in a random location around the map so long as that location is under a different streetlight.

Denizens will always run away when near a streetlight that is turned on, and the characters will often make remarks upon their strange behavior. Denizens are very vulnerable until they catch a player. With the Galvaknuckles or Bowie Knife, they can be killed in one hit as they are leaping, done by turning in their direction as they make their unique leaping scream and meleeing when they get close. It is also to be noted that a player can kill a Denizen with one hit while using the Bowie Knife or two hits with the default knife before they land on one's head. A trick to using the Bowie Knife on them is to not turn around; an experienced player that can guess fairly accurately the second before a Denizen will land on their head can swing their Bowie Knife without turning around and will kill them before they land on a players head.

Their leap is fairly slow and they can be hit from a distance beyond the standard melee range. The main purpose of the Denizen is to prevent players from leaving the parameters of the separate maps as opposed to an invisible wall, therefore they only appear when one goes too far into the fog. Denizens do not attack the player if they are on the bus roof, but the instant they are knocked off or step into the fog, they will attack. Denizens do not attack underneath the tower. Interestingly, only one Denizen will attack the player at a time, and only two Denizens can physically exist on the map at any one time.

Denizens can be caught on fire should they run through a lava pit or crack. These flaming Denizens will also explode upon death in an identical fashion to a flaming zombie, doing damage.

In-game view while being attacked by a Denizen. 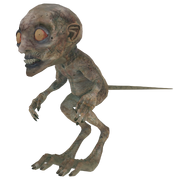 Its model in-game.
Add a photo to this gallery

Retrieved from "https://callofduty.fandom.com/wiki/Denizen?oldid=2489507"
Community content is available under CC-BY-SA unless otherwise noted.