For other characters, see Denny.

Private Denny was a U.S. Marine during World War II, in Call of Duty: World at War. He is seen on the level "Semper Fi" as the marksman for Sullivan's Marine Raiders rescue team. He is the only American sniper seen in the game. His name is used as a randomly generated Marine name in later levels.

Denny was the sniper of the Marine Raiders rescue team led by Sergeant Sullivan and Corporal Roebuck, which made a raid on Makin and saved Private Miller. After freeing Miller, he and the Marine Raiders assaulted the Japanese Troops stationed at the prison camp.

As the team advanced deeper into the Japanese camp, Denny took the left flank with another Marine Raider to provide covering fire. Shortly after the firefight, one of the squad members was killed in a Japanese booby trap, sparking a Japanese ambush. Denny then killed a Japanese soldier by striking him with the butt of his rifle, saving the squad mates distracted by the booby trap.

The team saves their rescue squad from entrenched Japanese, foiled an ingenious Japanese ambush and critically damaged the Japanese base. He escaped Makin on the second boat to leave the island after the mission is complete, behind Miller, Sullivan, and Roebuck. 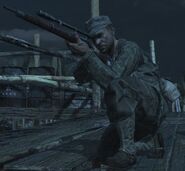 Denny takes aim at Japanese soldiers.
Add a photo to this gallery

Retrieved from "https://callofduty.fandom.com/wiki/Denny_(World_at_War)?oldid=2360280"
Community content is available under CC-BY-SA unless otherwise noted.