Departed is a map in Call of Duty: Ghosts. It is featured in the Invasion DLC.

Departed is a medium-sized map set in a rural Mexican town during the Dia de los Muertos (Day of the Dead) celebration. The colorfully decorated streets, vendor carts and storefronts provide ample cover for run-and-gunners, and players that complete the map’s unique Field Order will unlock the Death Mariachi killstreak. Armed with dual-wielding pistols, the Death Mariachi settles scores, with each kill turning enemy players into another member of the band, and a temporary squad mate.

The map is mostly close-medium range, but it has some areas where long-range weapons can be used, like at the center of the map where the Dia de los Muertos float while looking towards the other side of the map. Submachine guns and shotguns are most recommended as the map is mostly close-quarters, but assault rifles can do well too in certain areas, like the area mentioned above that is long-range.

In the Ghosts spawn, there is a red vase with white zig-zag stripes. Behind it is a breachable piece of wall; breach it to expose the egg. There are three white-red zig-zags vases. The one closest to the two walls as the player spawns is the right vase.

A view of the Departed map 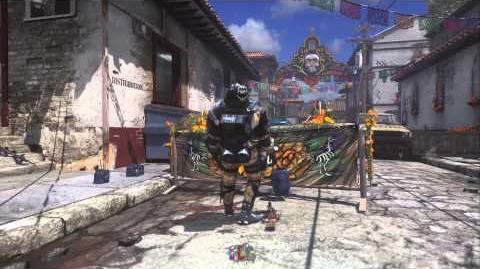