There are 11 ciphers and one scrap paper in Der Eisendrache.

This cipher is a Bifid cipher using "Maxis" as a key.

"Father introduced me to a new friend that just arrived, his name is Edward. He is nice but he doesn't like to share the toys." 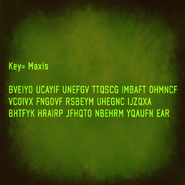 This cipher is a Playfair cipher using "Testsubject" as a key.

"The last test subject, the mexican, died but during the autopsy I have discovered the key to create the undead army that we seek. We are now ready to capture the 4 test subjects identified in Report 44."

This cipher is a Trithemius cipher.

"After the Great Battle, they stood upon the mound. Their light shone down and cleansed all the sickness for as far as the eye could see. They are the first; they are the last... Visions of fractured worlds and strange rooms haunted our dreams."

This cipher is written in Navajo code.

"I have received another toy posted by M"

"I meet the reporter who was to deliver the artifact. He said he was going to bring it on his truck in a crate. But when I arrived, the reporter was babbling, and acting wildly, waving a letter in his hand telling me to stay away. The crate containing the artifact had been sealed with some ancient magic. When I told him I must have the artifact and moved toward the crate, he attacked me. I acted in self-defense, stabbing him in the chest."

This cipher is a Homophonic substitution cipher. To decipher it, one need to use another paper found in the map.

"Mission log entry 45
I am over the site looking down through the open door. I can see weird distortion below me like a localized aurora borealis. I would normally cancel the operation but we don't have time. Luckily I have taken experimental weaponry version three that no one has seen before from my previous mission. Never say never.
Peter"

This cipher is written with Flag semaphore characters.

"After the success at the Rising Sun facility, Division 9 is moving with phase 2. The island facility is now operational and initial testing underway."

This cipher is written in Base64.

"We have discovered that there are beings that can travel between dimensions without the aid of the teleporters."

This cipher uses an inverse graphing calculator to create words from a formula. Three sections of the formula can be found around the map however the third one can only be found during the Time Travel step for the main Easter-Egg of Der Eisendrache.

"Division 9 has completed the resurrection of the ancient beasts for your eastern front. We expect Group 935 to reciprocate the favor." 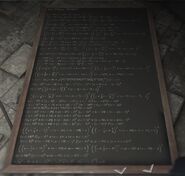 This cipher is an Übchi cipher using "The Castle" as a key.

"I cannot appear directly to you, I can only help you on your way…you guys are really making hard work of this. M"

This cipher is a Purple cipher.

The plain text is as follows:

"After sending him on countless suicide missions, he refuses to die. He is in your hands now, don't fail us."

A scrap paper can be found around the map, when put together it form a letter written in Japanese by the original timeline's Takeo Masaki to the Emperor, detailing his experiences at Division 9's island facility. The letter, translated into English, reads as follows:

"To my beloved Emperor,

It has been several months since I last received orders from you, and I cannot help but say that I am at my wits end.

Since I landed on the island, I, your foolish servant, have continued my inspection and recording of Division 9's activities. However, despite being directly dispatched by you, they regard my work with suspicious eyes. As such, I have been barred from, and forbidden access to, almost all research areas.

The situations continues to worsen. The installation commander ordered me to hand over my weapons for the duration of my stay. If he hadn't shown me the relevant papers ordering me to comply to maintain security, marked with your signature and seal, I would no doubt have objected. I have never raised any doubts whatsoever concerning your judgement Sir, but I am concerned that these circumstances may prove a great hindrance to my mission.

I understand how important the alliance is for our righteous cause and final victory, but the influence of the German operating force "Group 935" has become increasingly worrisome. Over the last few months, the number of officers they have here has increased; I cannot help but think that it is they who are propelling the plan.

Judging by what I have seen, the research done by Division 9 has been far beyond acceptable. In fact, their aberrational methods of weapons research can only be described as "abnormal". Not only do they use prisoners of war for living-body tests, but they have also been trying to control the supernatural powers of Element 115. I therefore think that if we permit them to continue their work, dark clouds may soon loom over our great country.

I, your foolish servant, will continue to watch them, and will report to you whenever possible. If the idea so pleases you, I think it is necessary that you intervene directly in order to for us to better understand the aim of Division 9's research, and make clear the ramifications of their plans.

I hope you receive this message.