Staff Sergeant Derek "Frost" Westbrook is a Delta Force operator assigned to Team Metal, operating under the command of Sandman. Frost is one of the playable characters in Call of Duty: Modern Warfare 3.

Frost participated in Operation Kingfish alongside Sandman, John Price, John "Soap" MacTavish, Simon "Ghost" Riley and Gary "Roach" Sanderson. He provided sniper support for Bravo Six before aiding them in trying to find Makarov inside the safehouse. After Makarov was not located, the team was extracted by helicopter, except for Price, who sacrificed his freedom by staying behind, fighting the Russians long enough for the others to escape until he was captured and sent to a gulag.

Frost participated in the Battle of New York during the events of "Black Tuesday" and "Hunter Killer". His team, Team Metal, was assigned to destroy a Russian electronics jammer on the roof of the Stock Exchange. Facing heavy resistance, Frost and his team managed to disable the jammer, evacuating aboard a Black Hawk helicopter. They were then pursued by a group of Mi-24 Hind gunships in the skies above New York, which Frost destroyed using a minigun.

Team Metal was then grouped with a squad of Navy SEALs to take control of a Russian Submarine (acting as a command vessel). Frost and Sandman sneak aboard the sub after an underwater insertion through the Brooklyn Battery Tunnel and re-program the missiles on board to launch onto the Russian fleet, effectively crippling Russia's seaworthiness and forcing them to retreat as Frost and Sandman make their escape via Zodiac.

Their team was later assigned to a hostage situation in Hamburg, Germany involving the Vice President. With Army Rangers and an Armor Unit, backing them up. Frost and Sandman were inserted by helicopter on the beach and fought their way through the city to retrieve the Vice President and extract him. After breaking through the Russian Army's defenses, Frost took up the gunner positions on the lead tank as Carter, the tanks commander and gunner, was killed by sniper fire. The tank column proceeded through indoor parking lot until the lead tank had gone a few stories down as the lots ramp could not support the tanks weight. With the fall rendering the tank inoperable, Frost, Sandman, and the tank's crew joined up with the Rangers in their push towards the Vice President's convoy. Upon reaching the convoy, the soldiers found the security team dead but found little trace of the VP himself. Proceeding into the destroyed building next to the convoy, Frost and Sandman discovered enemies inside and proceeded to breach the room the latter were holed up in, killing them and finding the Vice President.

They were sent to Paris, France to capture Makarov's bomb maker Volk under intel by John Price. They also get orders from Overlord to rendezvous with and provide backup to the GIGN forces led by Sabre. After meeting up, they carry out their orders of capturing Volk alive.

On their way to find Volk, they are met with heavy resistance from Russian soldiers and armored vehicles, but thanks to assistance from an AC-130 gunship, callsign "Warhammer", they were able to locate Volk, who was hiding in the catacombs. As Volk manages to run away, Team Metal and the GIGN fight their way to pursue Volk who gets away in a car. Frost's team managed to get in a van and chase Volk throughout the streets of Paris. They later apprehend Volk and receive orders to take Volk to their extraction point. However, it was compromised and they had to get to the secondary extraction point, which was near the Eiffel Tower. Receiving air support from the AC-130, they managed to get Volk off the battlefield.

Frost's last mission was to rescue the Russian President's daughter Alena Vorshevsky, who was being hidden in Berlin, Germany. He and Team Metal were initially supposed to provide sniper support for Team Granite, who would go in and secure Vorshevsky, but Granite were killed in an explosion after breaching the hotel. With no other Delta Teams available to go after Alena, Sandman volunteered his team to go after her themselves. After fighting through the city to save Alena, Frost and Sandman prepared to breach the room where she was being held, but were caught off guard as the enemy had breached first, knocking the team back. Frost was able to hold off the incoming enemies with Sandman's sidearm but was unable to save Alena, who was ultimately captured by Makarov's men and taken to Siberia. Frost did not take part in the rescue of the president and his daughter, avoiding the fate of the rest of his teammates.

Frost and Sandman in the wrecked Humvee

Frost, Grinch, and Sandman trying to help the GIGN in the mission "Bag and Drag"

Another shot of Frost in Find Makarov: Operation Kingfish

Frost, Sandman, and Truck pinned down in "Iron Lady".

Frost's body next to Sandman, seen via noclip in "Scorched Earth" 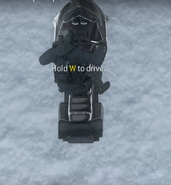 A top view of "Frost" riding a snowmobile during the mission "Black Ice".