Call of Duty Wiki
Register
Don't have an account?
Sign In
Advertisement
in: Articles to be expanded, Cleanup, Call of Duty: Advanced Warfare Exo Zombies Maps

"The hunt for Oz leads to a climatic showdown in Atlas's underwater city. Fight with up to 4 players to survive against endless waves of mutant zombies!"
— In-game description

Descent is the fourth and final (chronologically the fifth) Exo Zombies map featured in Call of Duty: Advanced Warfare. This map takes place in an underwater Atlas facility, known as The Trident Retreat, overrun by zombies.

Lennox, Lilith Swann, Jim Decker and Kahn return as playable characters, with Oz being briefly playable during a segment of the map. Oz is also featured as an enemy. Two new weapons are introduced in the map: the KL03-Trident and the Blunderbuss.

As in the previous maps, the players start first with no Exoskeleton, an Atlas 45, and 4 frag grenades. They must open doors to get to the exoskeletons. Activating the power in the corresponding areas will give access to the Exosuit and its upgrades. A new enemy known as the fusion zombie is introduced. This zombie can exhibit multiple combinations of zombie powers with a max of four total. This map also introduces a new airdrop, the Goliath, which allows players to control a highly effective goliath suit for a long period of time. This map also has the standard dog and contamination rounds occurring occasionally.

Classified as the spawn area, the landing is one of the two areas within the map considered "Outside" and where Orbital Care Packages will spawn. It features two buyable doors into the Trident Retreat that feature a drop that deals no damage to the players, both the doors cost 750 Credits and lead into the Reception (Labelled as E1) and Concierge (Labelled as E2) areas.

Only accessible during the battles against Oz, otherwise entirely inaccessible.

Oz (narrating): The Atlas infection blazed like a firestorm across the Western hemisphere, consuming everyone and everything in its path...

The screen slowly fades in, revealing Oz, now zombified, standing amidst the flames, as he grins menacingly.

Oz (narrating):... And I was the match those fucks had to use to start it.

Oz stares straight at Lilith, Decker, Kahn and Lennox, who are baffled by his appearance.

Decker grabs Lilith and puts her behind him.

Oz (narrating): I just couldn't remember any of it till now.

The ship starts to creek as Oz pushes aside some crates and slowly walks toward the crew.

Lennox: Take him down!

Lennox raises his HBRa3, ready to fire at Oz. Suddenly, the floor beneath Oz explodes and collapses. Oz jumps into the air, then disappears.

Oz (narrating): But you can't stop being what you truly are...

Decker points to the emergency pod.

The crew then head inside the emergency evacuation pod while Lennox covers.

Lennox enters the pod last, and closes the shutter. The pod then is released into the water, as it gets away. From afar, the Atlas aircraft carrier burns and crumbles into pieces as it sinks to the bottom of the ocean.

Meanwhile, inside the pod, the crew discuss their next move.

Lennox: Hah! We were lucky.

Kahn: Lucky? Take a good look at us!!

Lennox: Look, if we survived, chances are Oz did too. We gotta be sure.

Lilith: So, what happens if we find him?

Lennox turns over to the monitor.

Lennox: We picked up some closed chatter. We think it's an Atlas black site. We start there.

Lennox points to a location on the monitor.

The group arrive at the Trident Retreat, and assault all Atlas soldiers standing guard on the surface.

Oz (narrating): Atlas had always posed as the savior of mankind, while constructing some of the most horrific and lethal weapons to exterminate them, all for cold, hard cash.

Below them, Oz has already infiltrated the facility, effortlessly taking down all Atlas employees.

Oz (narrating): The only difference being... This weapon came home.

Oz knocks an Atlas soldier to the ground, then stomps on his head.

The end cutscene is unlocked upon killing Oz in his mutated form for the first time.

Lennox, Kahn and Decker stand around Oz's mutated corpse, having finally put him to rest. Lilith, meanwhile, is working on a computer, as she makes the final preparations.

Oz (narrating): It's better this way... I am what I am. And what I need to be, is deleted from this world. Say goodbye to big, bad Oz.

Lennox steps up with a lighter, ready to finish the job, but is interrupted.

Lilith steps away from the computer, and picks up a flamethrower. Lennox puts his lighter away and steps back.

Oz (narrating): Besides... There's only room for one monster in this world...

Lilith: Atlas will pay for what they did to you, Oz.

Lilith fires away at Oz's corpse, burning what remains of him.

Oz (narrating):... And it had better watch its fucking ass.

The screen then displays each of the crew member, as Oz narrates what happened to them afterwards.

Oz (narrating): Lennox got promoted to Lieutenant Colonel for eradicating the horrors of the Atlas infection. He remained as a total dick to this day... But I have to credit Lennox for pulling some strings in getting Decker admitted into Sentinel. Decker finally got a chance to be a proper soldier. He now fights on the front line against his former employer... Tired of the grind and the guns, Kahn took up the fight against Atlas the best way he knew how: by suing them. The evidence he had amassed for his case is both substantial and damned... Of course, he had a little help from a former Atlas IT employee turned hacktivist. Atlas may stack the jury in their favor, but my bet is Lilith will serve her own brand of justice once she empties all their bank accounts...

Back to the present, the crew gather around Oz's burning corpse, not knowing that beneath the facility, lies a hidden room, containing thousands of pods. Each of those pods contains a clone of Oz. The camera zooms in on one pod which shows an Oz clone inside of it, who suddenly opens his eyes. The screen blacks out.

Details of the map seen after a leak on PC.

Oz stands before the crew.

Lennox about to open fire on Oz.

The ship begins to explode.

The ship sinking as the crew escape in the emergency pod.

Discussing their next move.

"If we survived, chances are Oz did too. We got to be sure!"

The group at the Landing. 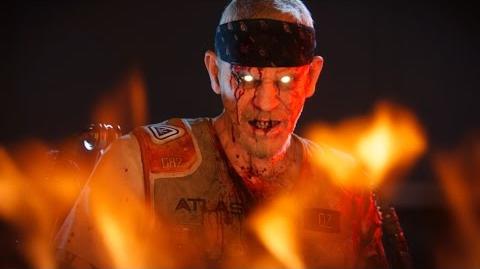 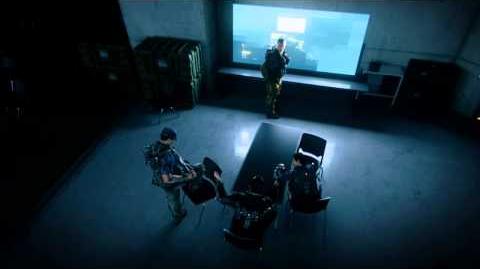 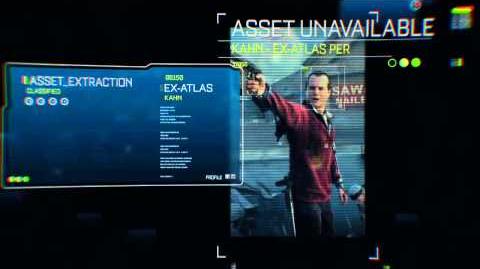 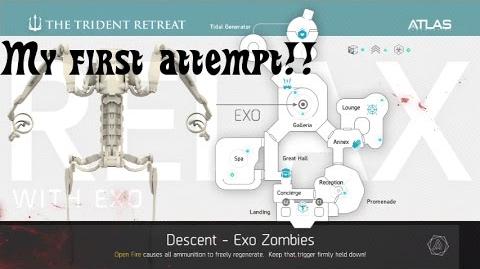