The Desert Eagle appears as one of the four sidearms available in game, being the most powerful (and most uncommon) one. The only level in which the Desert Eagle is available is "Crew Expendable." The Desert Eagle can only be obtained during the campaign if the player runs ahead of the other S.A.S. members in the first cargo hold of "Crew Expendable", at which point an Ultranationalist leaps out of a storage container, screaming, armed with two Desert Eagles. It is also seen being given to Khaled Al-Asad by Imran Zakhaev to execute President Al-Fulani in "The Coup", and is again seen being wielded by Imran Zakhaev during "Game Over". It can also be obtained by using the "give all" console command on PC during the levels "Safehouse" and "Game Over". A two-tone Desert Eagle can be seen in the armory in the mission "F.N.G."

The Desert Eagle is very popular online because of its sheer power. However, some people choose not to use it due to its low magazine capacity of 7 rounds. It is also one of the loudest weapons in the game, and has high visual recoil.

The Desert Eagle is more common in the campaign than it was in Call of Duty 4: Modern Warfare, appearing as the first sidearm used in the game, in the level "S.S.D.D." In the mission "Takedown", Rojas' Assistant uses a Desert Eagle to kill two Militia members who approach him, and another who tries to ambush him. It is sometimes used in the hands of the Militia. It can also be found in the makeshift hospital in "Of Their Own Accord", right next to Cpl. Keating's computer, and in one of the rooms with the resting soldiers on a small table next to one of the beds. In "Just Like Old Times", it can be found on a green barrel just before the riot shield ambush and in the control room just before Shepherd destroys it. In "The Hornet's Nest" it can be found in the lower scrapyard behind a blue overturned refrigerator. It is also in the armory in "Loose Ends," and Akimbo Desert Eagles can be found twice in the level, "Takedown". Its rate of fire seems to have been slowed down compared to the rate of fire in the previous game, and accuracy seems to suffer if fired repeatedly, making it almost useless unless using Akimbo.

The Desert Eagle, with its high power, significant visual recoil, and distinctive report, retains similarities to the one from Call of Duty 4: Modern Warfare. One new addition is that it now accepts attachments. However, its recoil has been increased considerably, both by increasing the kick (and making it arc to the right) and reducing its centerspeed. The weapon now sports a darker, two-tone finish. The Desert Eagle is now seen with tactical rails on both the top of the weapon and the underside of the barrel, and it also has a tactical laser mounted underneath. However, this is purely aesthetic, as the Desert Eagle cannot equip any attachments on the rails and players cannot utilize the laser. Another new feature is the addition of a white three-dot-sight setup; however, the sights are misaligned; the front post is to the right of the true impact point. It is interesting to note that, while using the Tactical Knife attachment, the Desert Eagle's sights become centered. It is one of the two handguns in-game that cannot accept a Suppressor, the other being the .44 Magnum.

The Desert Eagle goes fairly unused online due to its high unlock level and high recoil. However, players that take the time to unlock the Akimbo attachment are rewarded with a powerful and easy-to-use close quarters weapon. Some players prefer a single Desert Eagle over Akimbo, however, as the single Desert Eagle's hipfire accuracy is higher.

Despite the Desert Eagle's ability to kill in one shot at any range in Hardcore, it is usually passed up for more accurate weapons with the same ability, such as the M93 Raffica.

The Desert Eagle in Call of Duty: Modern Warfare 2.

The Desert Eagle in third person.

Reloading the Desert Eagle
Add a photo to this gallery

It is not nearly as useful as it is in Multiplayer, and is best reserved for wounded enemies, given its low firecap in single player and low ammunition.

The Desert Eagle is unlocked at Level 76. It is very much like it was with the Modern Warfare 2 version. It has high damage killing in two shots to the chest (three shots to the limbs, however) and a very high fire cap, but has high recoil, although recoil is more controllable than in Modern Warfare 2. The sheer amount of recoil makes a follow-up shot at range incredibly difficult, and as good as relegates it to close range. Akimbo is a great attachment, as it doubles the Desert Eagle's firepower with almost no drawbacks, as its recoil prevents it from being effective outside of close range. Use of this weapon in conjunction with a mid-long range weapon, such as LMGs or sniper rifles, complements the other weapon by taking up the range that they aren't effective in.

The Desert Eagle is in many respects outclassed by the .44 Magnum, which has the same damage and multipliers, further range before damage dropoff, more predictable recoil and gains additional ammo through Akimbo. The Desert Eagle does however have an 8-round magazine (compared to .44 Magnum's 6-round) and faster reload time.

It is the first tier gun in Gun Game and is equipped with a Tactical Knife. It is also the default weapon for One in the Chamber.

The Desert Eagle is often favored over other sidearms because of its sheer power, but the Desert Eagle has a low firecap, small magazines, and just slightly higher damage than the other pistols. Like all other handguns, the Desert Eagle is decent for the first few waves but should be exchanged for another weapon after the early waves. 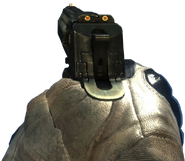 The Desert Eagle appears throughout the campaign as both a starting sidearm and a weapon found on top of ammo crates. It has the lowest ammunition capacity out of the handguns and highest recoil, but makes up for this with its power.

The Desert Eagle appears as a locked weapon and requires 500 kills with any pistol to unlock. The Desert Eagle can be used early in multiplayer should the player play One in the Chamber, Sharpshooter or Gun Game. Retaining all of its qualities from singleplayer, the Desert Eagle can down opponents with one shot. (More than one if they're equipped with the Body Armor Perk and/or damage multiplier has been set to low).

The files for Call of Duty: Modern Warfare 2 contain all the data for the Gold Desert Eagle, though it is normally inaccessible in game. Its implementation is almost entirely complete, and it can be used normally in game with a hack such as a Class Editor. This near-complete implementation suggests it was going to be a last-level reward like it was in Call of Duty 4: Modern Warfare, but it was displaced by the AK-47 fairly late in development.

Retrieved from "https://callofduty.fandom.com/wiki/Desert_Eagle?oldid=1264384"
Community content is available under CC-BY-SA unless otherwise noted.