Call of Duty Wiki
Register
Don't have an account?
Sign In
Advertisement
in: Call of Duty: Ghosts DLC

Devastation is the second downloadable content pack for Call of Duty: Ghosts. Developers released a video on Instagram on March 5th showing a new gun and brief glimpses of new maps.

On March 6, 2014, a preview video was released, showcasing the 4 new small-to-medium-sized maps, the new weapon, and Mayday, the next chapter of the Extinction saga. Devastation was released for Xbox One and Xbox 360 on April 3, 2014, and was released on May 8th for the PlayStation 3, PlayStation 4 and PC. It has a yellow color scheme in the 2nd Season Pass trailer.

Behemoth: Set on a giant earth excavator saw, a long-medium map high off the ground where players need to watch their footing. A Field Order Reward allows a player to board a Blackhawk helicopter with a minigun and fire down on enemies, much like the Chopper Gunner from Call of Duty: Black Ops.

Ruins: A Mayan temple complex in México, a triangular Domination map with A and C flags on either side and the B flag inside the middle of the temple. An active volcano can be seen smoking in the background. A Field Order Reward will cause the volcano to erupt, firing lava rocks/bombs that will explode and take out enemies, much like Mortar Fire. Another Field Order Reward will allow a player to become a Predator, which acts similar to the Michael Myers reward, in which the player is given increased health and unique weapons.

Unearthed: Set at a Cryptid meteor excavation site, Unearthed is a reimagination of Dome from Modern Warfare 3. A Field Order Reward allows a player to call in 3 Seeker Cryptids, they will then seek and destroy enemies by exploding, just like they do in Extinction. One Easter Egg twist to this map is players can unlock the Venom-X weapon from Nightfall. It is achieved by shooting the three black boxes on the crane on the map, which causes it to fall. Inside of the crane is a box that has the Venom-X in it. However, only one person can have it. After it runs out of ammo, it will not be available until the next match on Unearthed.

Collision: A container ship that has crashed into the Brooklyn Bridge in New York plays host to this small-to-medium-sized map. A flat map that suits run-and-gun styles of gameplay, the B flag sits above in the middle between two sniping points. A Field Order Reward lets players control an A-10 Warthog for two runs, similar to how Logan calls in A-10 strikes during the events of Homecoming.

The Ripper is an assault rifle/SMG hybrid weapon. Its barrel length and overall length/size changes as players switch between AR and SMG modes. By default, it is a three-five shot kill. The weapon's movement and hipfire are characteristic of the SMG class, allowing better mobility and more accurate hipfiring, even when in AR mode. The SMG mode gives the weapon a high rate of fire, but with short range and moderate-high recoil. When switched to AR mode, the weapon's range is doubled, a flat Reflex sight is flipped up, and its rate of fire is lowered, resulting in lower recoil. Previously, it was only available to Xbox Season Pass holders, but it was released with the rest of Devastation for Xbox players on April 3. As of the weekend of April 5th, the Ripper has been available for Playstation and PC Season Pass holders, but was released with the rest of Devastation for the remaining platforms on May 8th.

In the level Mayday, the player/team is sent to board a Chinese ship where Dr. Samantha Cross is held captive by Cpt. David Archer. While on board the ship destroying Hives and searching for Cross, players will face two new species of Cryptids. The Seeder attacks with gas clouds fired from its mouth, like the Scorpion. Occasionally it will fire a pod which will mutate into a turret that will fire on players unless taken out. The Kraken is a giant Cryptid with large tentacles that emerges from the sea, so far not much details are known about this species. The Venom-X can now be upgraded into one of 4 variations via crafting items found in the ship. Through the progression of Mayday, there are also side paths which players can take and gain access to items such as weapons, locker keys, things that will help players progress. Assuming, certain items can only be found depending on which path the players take.

Just like the previous DLC pack, Onslaught, players can find easter eggs on the DLC Multiplayer maps and earn bonus XP for completing the passive "Egg Hunt" operation. Each of Devastation's four DLC maps has one "Extinction Egg" hidden somewhere in the map, and must be shot once to count towards the task. Once all four are found, players are rewarded a bonus 2000XP. This can only be done once, but it also must be done in a public multiplayer match, not in a private match or Squads.

Additionally, when players destroy the first hive in Mayday after the four Eggs are found, they get an additional 10,000 XP on Extinction. 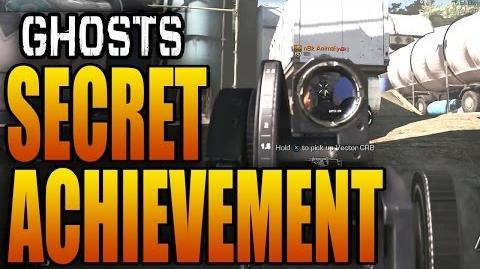 How to get the "Eggstra XP" Secret Achievement! (Call of Duty Ghosts Devastation Easter Egg)
Community content is available under CC-BY-SA unless otherwise noted.
Advertisement