Developer console is a tool available on video games, which is usually accessed by pressing the tilde (~) or grave key (`) key (the key may be different for keyboards with different language set-up; it is usually the key to the left of 1). They may only be accessed on PC and Mac. The console can be used to significantly alter the game, including but not limited to making the player invincible, obtaining a weapon that would normally be impossible to get, free-flying, changing game rules and more. The console can be used for testing and to give information useful to the developers of the game, generally for debugging, hence the term "developer console".

Since Call of Duty uses the same base for most of its game engines, many commands remain the same throughout the series.

The process for enabling console commands in Call of Duty is different to the others, as it runs on the ID Tech 3 Engine.

Note that the player has to devmap or spdevmap as opposed to selecting a map from the mission select screen in order for the commands to be available. In addition, the mission names are not always their in-game names. For example, Death From Above would start with spdevmap ac130, and Nacht der Untoten would start with devmap nazi_zombie_prototype. The names can be seen in their individual articles on the wiki or by browsing the game files. To find out the codename of the map you are currently playing on simply type mapname in the console, the first option in the dropdown shows the codename of the current map.

Note that not all commands will work.

The player should note that the tilde or grave key will not work in singleplayer. The only way to use the command console now is to simply enter bind commands into the config.cfg file.

To use the cheats, the bind command must be used: bind X "Y" - on the place of X the player must put a key, which is not in use (they should check the other "bind" lines, and ensure that the key they want is not already in use). On the place of Y, between the two tildes, the player must put the cheat code. Before someone attempts to enable the cheats bound, they need to bind the seta thereisacow 1337 command and enable it every time they start the game. The bind should look like this: bind X "seta thereisacow 1337", where X is the bound key.

When ingame, the player simply has to press one of these keys, and the cheat code will be activated.

There are also commands that alter game elements. These cannot be activated, but changed. When entering in one of these commands, the console will say "Domain is any number between X and Y (X and Y being the minimum and maximum values)." As such, the player can enter any number between X and Y to change the domain, and as a result, the effect. The default is also given, so players can return to the normal value if they wish. An example is "timescale 1", which dictates the game's speed. The default is 1, but players can enter any value between 0.001 (X) and 1000 (Y).

Below is a list of some of the most useful console commands. Note that the underscore ( _ ) cannot be used in place of a space, and vice versa.

Console commands that can potentially give the player an unfair advantage cannot be used in online multiplayer. Certain visual and harmless tweaks can be used, such as those to toggle HUD elements such as crosshair, or edit graphical settings such as removing fog. On LAN servers however, commands can still be used as normal.

The console open in the upper part of the screen

An RPG with no rocket that can still be fired, found in "Crew Expendable" and "The Bog".

An RPG which behaves very differently to the normal RPG, and makes a different sound effect found in "Safehouse".

An AT4, originally usable in both campaign and multiplayer. Only in "Shock and Awe". 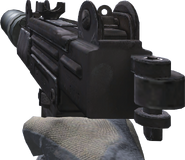 A Mini-Uzi with a silencer, used by Viktor Zakhaev, found in "The Sins of the Father".

The Default Weapon, found in all missions.

An M4A1 SOPMOD without the red dot sight, found in "Ultimatum", "All In" and "No Fighting In The War Room". 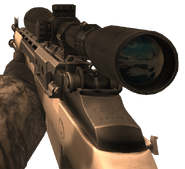 An M21 with a different style of desert camouflage, found in "The Bog" and "All In".

A Stinger which cannot be used and looks like an AT4, found in "Game Over".

The MP5 with the field of view default setting of "65"

"Camera" weapon in mission "All In"

M40A3 with ACOG Scope, if using the cg_gun_x 50 command.
Add a photo to this gallery

The following images (save the last two and the pickup icons) use a field of vision of 120.

Knife that is used to kill Shadow Company soldier while rappeling in mission "Just Like Old Times", through give rappel_knife.

Pickup icon of the Akimbo FAL.

Knife used to kill Shepherd, with give ending_knife.

Desert Eagle used in "Endgame". However, it cannot kill Shepherd, as his plot armor is still activated.

Both weapons appears on spec ops map Wreckage and Suspension only. Notice there is no red dot attachment.
Add a photo to this gallery

MP40 in map Ascension
Add a photo to this gallery

"Camera" weapon can be seen when using the Remote Turret in mission Return to Sender, at high FoV
Add a photo to this gallery

Retrieved from "https://callofduty.fandom.com/wiki/Developer_console?oldid=2510582"
Community content is available under CC-BY-SA unless otherwise noted.