Dexterity is a Tier 3 perk in Call of Duty: Black Ops II.

It allows the player to climb ladders faster, mantle over objects faster, recover from melee faster, and reduces the time it takes to raise the players weapon after sprinting. Dexterity can be used in tandem with weapons that feature the Quickdraw Handle for even more effective rushing classes.

Dexterity returns in Call of Duty: Infinite Warfare as a Tier 1 perk.

It lets players reload and swap weapons faster, same as Sleight of Hand Pro in Call of Duty: Modern Warfare 3 and It is unlocked at Level 5.

This perk is commonly used in tandem with weapons with relatively slow reload times or switch-out times, such as sniper rifles and light machine guns. As these weapons leave the player vulnerable, especially in close quarters combat and Free-for-All matches, players may not have the chance to reload before engaging another enemy. It can especially be useful to snipers who also need to quickly switch to their secondary. However, run and gun classes to sport a benefit, as they can benefit from keeping suppressing fire whilst on the move. 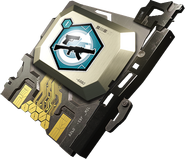 The perk model as seen in Create-a-Class. 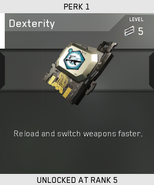 Dexterity being unlocked in multiplayer.

Dexterity returns in Call of Duty: Black Ops 4 as a Tier 2 perk. It allows the user to mantle, climb and slide faster. It also speeds up weapon swapping and increases weapon accuracy while jumping or mantling.