Survive for as long as possible against limitless waves of the Undead.

Die Rise, also known as Great Leap Forward is the fourteenth Zombie map. It is included in the Call of Duty: Black Ops II downloadable content pack, Revolution. It was released on January 29th, 2013 for Xbox 360 and February 28th, 2013 for the PS3 and PC. The map pack costs individually $14.99 (1200 Microsoft Points), but is also a part of the Season Pass costing $49.99 (4000 Microsoft Points).

Die Rise occurs in post-apocalyptic Shanghai, China; the fight against the zombies takes place on two skyscrapers. The top half of the spawn building broke off and has the illusion of being a third building. It is also the first map in Zombies to introduce a true element of verticality, including broken elevator shafts, upside down skyscrapers, deadly falls, and elevators which transport randomized Perk-a-Cola machines and the Pack-a-Punch up and down the floors. (The Quick Revive always appears in front of the spawning room. The Who's Who and Speed Cola machines always appear inside the first building, and the remainder appear on the Dragon building.) When jumping from building to building, mattresses are scattered throughout to prevent injury from the jumps. The map contains tighter corridors and long vertical drops, unlike any other Zombies maps.

The map features a new buildable Wonder Weapon (similarly to TranZit), the Sliquifier. A new buildable device is also featured, the Trample Steam, which has the capability to fling players and zombies alike. Die Rise also features a new enemy, the Minion, which looks and acts similarly to Phasing Zombies. They come during specific waves, and can do short teleports around the environment. There are also zombies with stronger health, identifiable by their body armor. A new perk is also introduced, Who's Who which allows the player to revive themselves by taking control of a new character (with only a M1911) nearby who can try to revive the real character, or another nearby player can revive either version of the player using Who's Who.

The musical easter egg for Die Rise is We All Fall Down by Kevin Sherwood, activated by finding three teddy bears scattered across the map.

More Persistent Upgrades appear to have been added to the map, one of them bearing simliarity to Juggernog.[1] Additionally, perma-perks gained in TranZit carry over.

A view of the Earth is shown from Space, obviously damaged from the rockets, with cracks in it showing lava, and meteors travelling by it as a distorted voice from Samuel Stuhlinger's head is heard.

Samuel Stuhlinger: "I don't understand. Why are you doing this? Why me?"

The voice continues to talk to Samuel, as the background now moves closer into the Earth to North America, and shows them teleporting to a skyscraper in Shanghai.

Samuel Stuhlinger: "Travel where? Don't you get it there's nothing left!"

Samuel gazes outside from the building, looking at the surroundings. The voice still continues to talk to him.

The view shows a birds eye view of the skyscraper, then Samuel looking down it, and finally a close up of his face, with the voice talking to him.

Samuel Stuhlinger: "Well maybe I don't wanna. Huh? Did you think of that?

The close up of him continues, then a quick flashback of Samuel eating a human arm/zombie arm, and following that, zombies begin to surround him.

Samuel Stuhlinger: "Oh, you can't tell them about the flesh... what I did! They'd kill me if they knew... AWW  SHIT!"

As Samuel notices the zombies swarming him, Russman dives in, and fires dual wield Five Seven pistols at the horde, successfully killing a few. He faces Samuel.

Russman: "If you're going to talk to your imaginary friends, Stu, you might wanna wait until you're in a z-free zone!"

Samuel then watches as a Minion tackles Russman, and rips him in half, before letting out a final scream. Suddenly, an elevator arrives by Samuel, occupied by Misty and Marlton, who wields a sniper, and begins shooting at the zombies.

Samuel is shown racing towards the elevator with them, as the huge crowd of zombies approaches fast. Right before they get attacked, the door shuts, and the elevator begins to travel down.

Samuel Stuhlinger: "What do we do now?"

Abigail "Misty" Briarton: "We arm up, find a good place to defend, kick ass, that's it!"

Samuel continues to hear the voice in his head, which confuses him.

Distorted voice of Richtofen: "Accept your fate, begin a new!"

The quote is hard to hear at first from the player's point of hearing.

Marlton Johnson: "What are you talking about, Stuhlinger? Misty made it pretty clear!"

The elevator door opens, and outside is filled with zombies. Richtofen is now heard clearly and is speaking to Samuel.

The three survivors begin to shoot the horde, as they are trapped.

The group are eventually caught in the crowd, and presumably killed, until suddenly, they are seen teleporting back to the Starting Room, having no memory of what happened earlier.

Samuel Stuhlinger: "Have we been here before?"

Abigail "Misty" Briarton and Samuel Stuhlinger holding off the undead. The power switch can be seen in the background.

Crumbling skyscrapers as seen in the preview trailer.

An upside down building in Die Rise.

The buildings in the trailer.

Marlton, Russman, and Misty holding out in front of a moving elevator with Speed Cola

A view of map.
Add a photo to this gallery 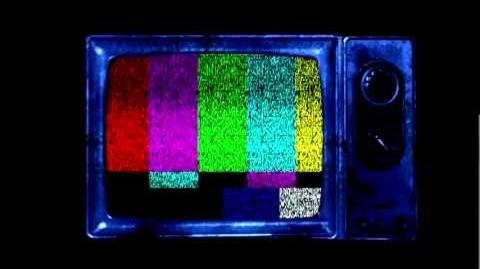 Retrieved from "https://callofduty.fandom.com/wiki/Die_Rise?oldid=1886128"
Community content is available under CC-BY-SA unless otherwise noted.