The Wii is a console manufactured by Nintendo. In the Call of Duty community, it is noted for its versions of the games being inferior. There are several reasons for this, most notably the lack of power in comparison to the PlayStation 3, Xbox 360, and PC, which result in decreased visuals and some gameplay mechanics being removed, and the Wii not having as large of a focus on internet connectivity like most other consoles of the generation, as a result the online modes are more bare-bones then other versions of the games, among other reasons.

A list of features removed from the Wii versions of the game, most due to lack of processing power or RAM:

The Gas Mask soldiers from the Wii version of "Executive Order". 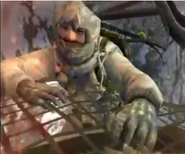 Harris in the Wii version of "WMD".
Add a photo to this gallery

To compensate for the lack of many features, Treyarch has added several new elements, changes and improvements that are exclusive to the Wii versions of the games.

Retrieved from "https://callofduty.fandom.com/wiki/Differences_of_Call_of_Duty_games_on_the_Wii?oldid=2501790"
Community content is available under CC-BY-SA unless otherwise noted.