Mosin-Nagant, PPSh-41, Tokarev TT-33, SVT-40, Panzerschrek or any weapon picked up in Campaign.

For other characters, see Dimitri and Petrenko.

"Dimitri Petrenko was one of the bravest men I had ever known. He fought by my side from the siege of Stalingrad to the fall of Berlin. The wounds he sustained ensuring our victory should have earned him a hero's welcome to Russia. But Stalin had little need for heroes. Dimitri Petrenko was a hero, he deserved a hero's death. Instead of giving his life for the glory of the Motherland, he died for nothing. Like an animal... He should have died in Berlin."
— Viktor Reznov recalling the events of Project Nova to Alex Mason.

Private Dimitri Petrenko (Russian: Дмитрий Петренко) was a Soviet soldier assigned to the 150th Rifle Division of the 3rd Shock Army during World War II. He is one of the three main playable characters of Call of Duty: World at War as the player controls him through the Russian campaign, and makes an NPC appearance in Call of Duty: Black Ops in "Project Nova", a flashback mission with Viktor Reznov (who is the playable character) where he is killed.

"Shhhh...I need your help. Do what I say, and we can avenge this massacre."
— Reznov to Petrenko, them being the only survivors of the massacre.

Dimitri is first seen in the level "Vendetta" among the many wounded and dead Red Army soldiers in a fountain at Red Square and goes unnoticed by playing dead. Momentarily, he comes across Sergeant Reznov who also survived the massacre. Petrenko is ordered to take Reznov's Scoped Mosin-Nagant because Reznov can not shoot due to a hand injury. Dimitri snipes German sentries under the cover of a bombing raid. After eliminating a German sniper, Reznov and him then meet with elements of the Red Army and provide sniper support for the attacking Russians and then move to assassinate Heinrich Amsel, the German officer responsible for the massacre at the square.

Reznov congratulates Dimitri on his marksmanship, only to be attacked by a squad of German soldiers who storm the building they are in. Dimitri then jumps into a canal after Reznov to escape the Wehrmacht soldiers.

"Haha! Once again you cheat death!"
— Reznov after rescuing Petrenko.

Three years later in the German countryside, Dimitri is captured and taken into a house by three German soldiers. While the Germans were conversing and searching Dimitri's dead comrades, Dimitri tries to reach for a fallen comrade's Mosin-Nagant only to be kicked and punched in the face by a German soldier. Before they can execute him, however, a T-34 Tank blows a hole in a wall, injuring two of the three German soldiers.

Reznov guns down the last German soldier and orders Chernov, a new recruit, to execute the remaining German soldiers. When Chernov refuses since they were already bleeding to death,  Petrenko has the option of executing his dying captors himself as he and Reznov have no pity for Wehrmacht soldiers after the atrocities they witnessed in Stalingrad. After executing or leaving the wounded Germans to die, Petrenko joins Reznov for the first time in three years in the final push to Berlin.

"Fortune smiles on us. In Berlin the Germans will truly see what they have unleashed. But in the midst of all the blood, the bullets, and the dead I have found an old friend who is still very much alive. Dimitri Petrenko, I saw this man cheat death time after time at the siege of Stalingrad. As long as he lives the heart of this army cannot be broken, he makes us all proud."
— Reznov telling everyone about Petrenko's accomplishments.

Upon their reunion, Reznov speaks a lot of Dimitri and often tells the other soldiers to follow him as an example, especially to Chernov, who seems to be shocked by the vengeful violence of his comrades against Wehrmacht soldiers. After blowing up German Panzer Tanks, King Tigers and German forces guarding the last defensive line protecting Berlin in a T-34, Petrenko and Reznov join numerous Russian forces in clearing Berlin. During a skirmish in a Berlin subway, however, the tunnel Petrenko, Reznov and Chernov are in is flooded by water, although the three miraculously survive.

"Dimitri, lead the charge!!!"
— Reznov telling Petrenko to push forward into the Reichstag.

After recovering, Dimitri participates in storming the Reichstag, the seat of the German Parliament and final Nazi stronghold. However at the entrance of the Reichstag, Chernov is incinerated by a flamethrower and falls to the ground coughing and writhing in pain, Reznov then takes pity on him and takes his diary and reads it, Chernov's death forces another soldier to carry the flag, although he is killed as well during the final stages of the battle, forcing Dimitri to plant the Soviet flag.

However, when trying to raise the Soviet flag, a dying Schutzstaffel Trooper severely wounds Petrenko by shooting a near-fatal shot at him with a P-38. As the lone German collasped, Reznov charges forward with a machete and repeatedly stabs and slashes the German as he dies and then throws his body from the Reichstag. Reznov then cuts down the flag and tells Dimitri the honor is his. Dimitri then raises the Soviet flag over the Reichstag as cries of "Ura!" are heard from the victorious Russians.

"After this mission, do you think we will go home?"
— Petrenko asking Reznov about returning to the USSR.

Two months later, Dimitri still managed to fully recover from his wounds during the Battle of the Reichstag. During July and August, Petrenko was assigned to the Soviet Occupation Forces in Berlin. In Reznov's flashback level "Project Nova", some time in October, Reznov and Petrenko were both assigned to "Unit 45," a Soviet special projects team under the command of General Nikita Dragovich.

Under Dragovich's and Kravchenko's orders, Dimitri and Reznov were dispatched to capture the Nazi scientist Steiner and secure a shipment of Nova-6, an extremely toxic nerve gas, from the last remaining Nazi base in the Arctic Circle. After Steiner was captured, he was brought back to Dragovich and Kravchenko to give them the location of the Nova-6 weapon.

While they were successful to this end, Dragovich and Kravchenko betrayed Dimitri, using him and his men as test subjects for the gas. Dimitri died a slow and painful death from the Nova-6 before Reznov's eyes on October 29, 1945, at the age of just 22. Upon seeing this, Reznov vowed to kill Dragovich, Kravchenko and Steiner in order to avenge Dimitri, leading him to sabotage the brainwashing of Alex Mason in order to kill these three men. 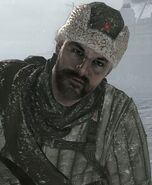 Another player character model for Dimitri in Co-Op

Retrieved from "https://callofduty.fandom.com/wiki/Dimitri_Petrenko?oldid=2032035"
Community content is available under CC-BY-SA unless otherwise noted.