Call of Duty Wiki
Register
Don't have an account?
Sign In
Advertisement
in: Call of Duty 2 Russian Characters

All of the Soviet campaign

Lieutenant Dimitri[1] Volsky (Russian: Дмитрий Вольский) was a Red Army officer in the 13th Guards Rifle Division who fought at the Battle of Stalingrad. He was the unit leader in most of the Soviet campaign of Call of Duty 2. He appears to be good friends with Vasili.

He leads the team taking apartment buildings and the City Hall in Stalingrad. He also orders Private Vasili Ivanovich Koslov to open fire on a German ammunition dump to allow Soviet ground forces to plant TNT on the materials inside. Afterward, a Panzer II appears and he tells the player to get back from the windows. He orders the player to hunt down the tank but recommends one flanks it and hit it from the side. Some time after that, the player will have to get to the City Hall and secure it in "Comrade Sniper". In "Comrade Sniper", Volsky and the rest of the unit are apparently clearing the first floor while the player and another soldier clear the second. After regrouping and entering the bombed out room, a sniper kills a comrade and the rest scatter.

A comrade named Pavel distracts the sniper by putting his helmet on the barrel of his rifle and waving it. Volsky points out the sniper's position when he fires on it. After clearing the City Hall, one must repel an assault comprising of halftracks and infantry. He is last seen on the level "Comrade Sniper" congratulating Vasili on repelling the German assault on the City Hall in Stalingrad at the end of the level and the Soviet Campaign.

"Don't try to be a hero Vasilli! We must find a way to attack that panzer from the side!"
— Volsky to Vasilli

"Well fearless comrade Vasilli, looks like our numbers didn't come up today, not yet anyways."
— Volsky to Vasilli

Volsky firing with a MG42. 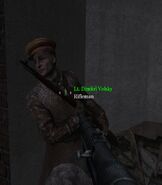 Note that his cap is torn.