"The Dischord pistol is single shot and fires energy bullets. Kill a zombie with this and they spin around, arms out, gibbing and knocking other zombies into the stratosphere."
— Weapon Description

The Dischord is a wonder weapon that appears in the Call of Duty: Infinite Warfare Zombies map, Zombies in Spaceland. When fired, the Dischord causes zombies to rapidly headspin and create a wave motion effect, instantly gibbing and killing nearby zombies.

When a player kills a zombie, it will sometimes drop a pair of shades. Picking them up and equipping them will cause the player's vision to go into black and white. Here, the player can find a total of five targets that glow red and grey. The locations are as follows:

Once a total of five have been shot, the battery will appear at the center of the dance floor in the Astrocade.

As the game progresses, zombies will randomly drop three types of souvenir coins, Green Yeti, Blue Space Man, and Red Alien. In the alley outside the Astrocade, the same with the Blue Bolts perk machine at the end, place one coin of each color in the Souvenir Coin Machine. Order does not matter. After the third coin is deposited, the souvenir prize will drop and a toy disco ball will spawn beside the machine.

After turning on power to all sections of the map and linking all four teleporters, enter the central teleporter into the Pack-A-Punch room. In the left hand corner of the room is a table with four UFOs. Interact with the table to send the UFOs out into the map. These UFOs will begin a flight pattern over four different traps: The Disco Trap, Chromosphere, Dragon's Breath, and Blast Off.

Head to the Astrocade disco trap and in a single activation of the trap, kill 20-30 zombies with the trap. This will cause the UFO to change its flight pattern to a larger one around the area. With 300 tickets, purchase an Arcane Core from any reward stand location around the map. Using only the gun with the Arcane Core attached, reap zombie souls by getting kills near the UFO. Once the requisite number of kills has been reached, the UFO will stop collecting souls and will drop a green glowing orb.

Picking up the orb will attach it to the Arcane Core on the front of the player's weapon. With the core, head over to the Kepler System section of the map and shoot one of the third target if going left to right inside of the Alligator Head, which will reveal the green crystal.

Once the player has collected all three parts, head over to the Astrocade section of the map and interact with the cardboard cutout close to the prize counter. Each piece will need to be added separately. Once all three have been added, the player be able to pick up the Dischord Quest weapon. The weapon will cause a zombie to stop in its tracks when hit and begin break dancing. As the zombie head spins, all zombies around the dancing zombie are kicked and go flying. 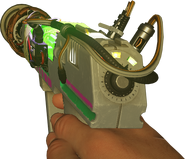 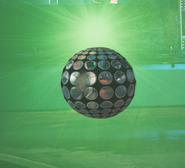