"Dispatch" is the fifth and final Strike Force mission in the Call of Duty: Black Ops II campaign. It becomes available after completing four strike force missions and "Suffer With Me". The mission involves killing Tian Zhao before the SDC can invade Russia.

The mission starts with three SEAL operatives firing SMAWs at three SDC VTOLs, one of them carrying Zhao. The player will not have any reinforcements on standby if Section did not record Menendez's conversation involving Zhao in "Fallen Angel". The team pushes forward to the crash site, where Zhao hides in his downed VTOL behind a security barrier. After resisting enemy forces that include infantry and several turrets and ASDs, a SEAL member places an EMP module near Zhao's VTOL. After successfully going off, the VTOL door opens. An operative shoots Zhao with the KAP-40, and confirms the kill by sending an image of Zhao's body to the command.

Passing through the streets.

Bringing out a SMAW on a group of ASDs.

Taking a picture of Tian Zhao.
Add a photo to this gallery 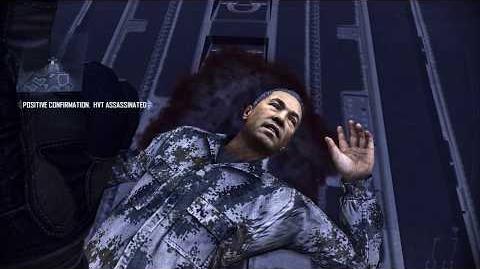 Retrieved from "https://callofduty.fandom.com/wiki/Dispatch?oldid=2523454"
Community content is available under CC-BY-SA unless otherwise noted.