"Judging by what I have seen, the research done by Division 9 has been far beyond acceptable. In fact, their aberrational methods of weapons research can only be described as "abnormal". Not only do they use prisoners of war for living-body tests, but they have also been trying to control the supernatural powers of Element 115. I therefore think that if we permit them to continue their work, dark clouds may soon loom over our great country. I think it is necessary that you intervene directly in order to for us to better understand the aim of Division 9's research, and make clear the ramifications of their plans."
— Takeo Masaki

Division 9 was created on April 10th, 1937 after the Imperial Japanese Army discovered fragments of an Element 115 meteor in a swamp within Japanese territory. The Rising Sun Facility was established on the site to study the Element 115 with Division 9 overseeing the operations.

After the success of the Rising Sun Facility, Division 9 moved with Phase 2 and established a research facility on Pohnpei island. After the war, Division 9 was disbanded and their research and materials were acquired by the US Government and stored in Groom Lake, Nevada. Among some of these materials was an Elemental Shard.

When Primis (Edward Richtofen, "Tank" Dempsey, Nikolai Belinski, Takeo Masaki from Dimension 63) arrived at the Der Riese facility and Richtofen killed his Ultimis self, moments after he teleported Maxis and his daughter Samantha away, it triggered fractures across space and time.

In the Proditione Fracture, the Rising Sun Facility was overrun April 12th, 1942. However, the Emperor of Japan was so impressed with the results of Division 9, he approved the construction of the Island Facility in Pohnpei, which construction was completed on October 9th, 1942. A month later, Takeo Masaki was dispatched by the Emperor to oversee the work of Division 9 at the Island Facility.

On February 6th, 1943, Division 9 expanded their experimentation to include use of prisoners of war, their own staff, arachnids, and "mystical beasts". Few months later, Takeo reported to the Emperor that the work being done at the Island Facility was "unacceptable". On July 24th, Takeo was taken prisoner by Division 9 on the orders of the Emperor to be used as a test subject for their "organic plant-based" experiments.

When Primis arrived at the Island Facility, on October 18th, 1945, they fought Ultimis Takeo, who was turned into a giant Thrasher, and were able to free him and eventually reverse the effects of the mutation. Ultimis Takeo then proceeded to commit seppuku with Primis Takeo being his kaishakunin. His soul was preserved by Richtofen using the Summoning Key.

In the Agonia Fracture, Division 9 resurrected ancient dragons for Group 935. The dragons were delivered on the Eastern Front to break the stalemate between the German and Soviet forces.

By 1942, the dragons were deployed in Stalingrad.

A Division 9 research lab found in Zetsubou No Shima. 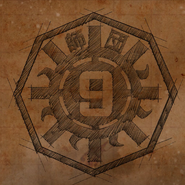 A drawing of the Division 9 logo as seen in the Zombies Chronicles timeline poster.