Complete the Into the Furnace Campaign Mission.

"A legend among Spetsnaz. Wounded in 2nd Chechen War, removed from active duty. Re-learned how to walk, passed requirements to re-enlist. Served under Gen. Barkov until filing a complaint with Moscow, citing civilian deaths."
— In-game biography

Dmitry Bale was born in 1984 in the Soviet Union. In 2005, Bale joined the Spetsnaz selection with his brother Maxim "Minotaur" Bale and served in the Spetsgruppa A – Alpha Group in counter-terrorism where he achieved the rank of Staff Sergeant. Bale and Minotaur were described as "inseparable".

In 2009, Bale was gravely injured during the Kurbanov Hospital siege during the Second Chechen War. Bale suffered a C6 spinal cord injury from a gun shot wound. He was reported dead to Minotaur who was discharged for psychological trauma, blaming himself for the "death" of his brother.

Bale was allowed to continue active duty in an administrative role in the GRU. He was fully rehabilitated over five years. In April 2014, he passed the physical requirements for readmission into the Alpha Group. Bale later served six months under General Roman Barkov until he filed a formal complaint, citing civilian deaths.

In July 2019, Dmitry tracked down his brother and recruited him for the Allegiance in November of the same year.

Bale appears in Call of Duty: Mobile and was added on March 31, 2022, during Season 3: Radical Raid as part of the BR Breakout Featured Event.

Agent Orange skin included in the "The Huntsman" Operator Bundle.

A render of Bale in the Sokoly operator skin. 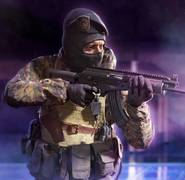