Dome is a Multiplayer and Survival Mode map in Call of Duty: Modern Warfare 3.

The small map of Dome takes place in an abandoned NATO military outpost, in an unknown location in the Middle East. It is stated as a "Derelict Cold War era desert radar command bunker".

Dome is a small map in Call of Duty: Modern Warfare 3 that has many close quarters combat situations. The two main spawn points are near the dome itself, and near the entrance gate on the other side of the map. The dome covers only a little portion of the map, and serves no significant purpose besides possible defensive set-ups And a spot for players to snipe from. There is a track around the second story of the dome that overlooks most of the map. Nearby the dome is a bunker with two entrances, and there is a bombed-out portion in the middle of the bunker. Across the bunker is a building that has a main room and a back hallway. There are multiple vehicles on the map that can be used for limited cover, one of which is an M1A2 Abrams tank.

In Survival Mode, Dome is a Tier 2 map and has the difficulty of Regular. The player(s) start with the USP .45, two Frag Grenades, two Flash Grenades, a Self Revive and 250 Armor. The hostiles include Bomb Squads, Chemical Warfare, Choppers, Attack Dogs and Riot Shield Juggernauts.

There are very few spots that are easy to defend, with the exception of the bunker and the dome with the ladders leading to the balcony, which is vulnerable against air support but provides a good point for snipers to pick off hostiles before they reach a players main point.

"Frog" Graffiti inside of the main building. 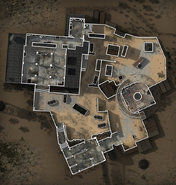 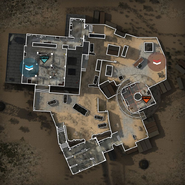 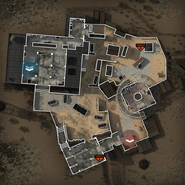 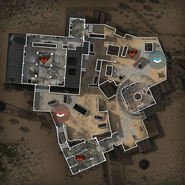 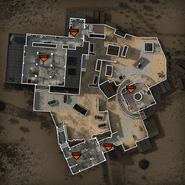 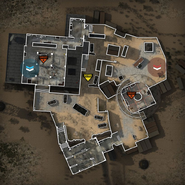 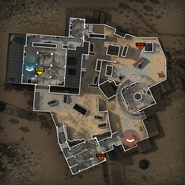 Search and Destroy Locations.
Add a photo to this gallery

Video:Call_of_Duty_Modern_Warfare_3_-_CTF_-_Dome_Delta_Force
A CTF match on Dome
Retrieved from "https://callofduty.fandom.com/wiki/Dome_(Modern_Warfare_3)?oldid=1510548"
Community content is available under CC-BY-SA unless otherwise noted.