In Call of Duty: World at War, the Double-Barreled Shotgun can be found in "Eviction," and a sawed-off version with a foregrip can be found in "Ring Of Steel" inside the asylum. It is extremely powerful, being able to gib with ease, although it has short range.

The Double-Barreled Shotgun is semi-automatic, firing at 212 RPM. Using Double Tap will allow the user to fire at 283 RPM. This fire rate allows users to fire a follow-up shot quickly if the first shot doesn't kill the opponent, which is very helpful.

The Double-Barreled Shotgun has average mobility for a shotgun. The user can move at 100% of the base speed, but only strafe at 40% of the base speed. The aim down sight time is only 200 milliseconds long. As suggested by its name, the Double-Barreled Shotgun holds two shells at a time, and has a 2.75 second reload animation which can be Reload Cancelled after 1.95 seconds. The two-shot capacity means users should be prepared to switch quickly to a secondary weapon to complete a kill. 20 shots in total are available at spawn.

Two attachments are available: the Grip or Sawed-Off barrel.

The Grip reduces the recoil per shot and idle sway speed of the Double-Barreled Shotgun. Neither of these stats are very problematic, and seeing that the Grip comes at the expense of the user's perk 1 slot, it should not be used.

Sawed-Off makes the following statistical changes to the Double-Barreled Shotgun:

While the damage per pellet is increased, the range reduction and increased hip-fire spread greatly inhibit the overall usefulness of the Double-Barreled Shotgun. Use of the Sawed-Off attachment is therefore ill-advised, unless it is paired with a more versatile weapon with Overkill.

The Double-Barreled Shotgun is available on all maps, with its Sawed-Off counterpart appearing in the first three. The problem of constantly needing to reload and its low accuracy make this an uncommon weapon used; however, it has extremely high damage and is a one-hit-kill up to about round 15. On the first three maps, the M1897 Trench Gun and the Double-Barreled Shotgun can share ammo; up to 120 shells in reserve. Double Tap Root Beer and Speed Cola are advised to increase its firecap and decrease its reload time by a significant amount. Also, Juggernog is a good choice to compensate for possible missed shots in close quarters, where the player is left vulnerable. When Pack-a-Punched in Der Riese, it becomes the 24 Bore Long Range, increasing damage, accuracy, range and decreasing reload time.

The Double-Barreled Shotgun in third person

The Sawed-Off Double-Barreled Shotgun with Grip in third person

Firing the shotgun in third person. Note the ejecting shell

The Snuff Box (only available via modding)

Example of the damage the Sawed-Off can do 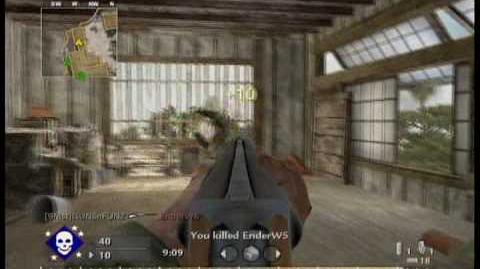 In the iOS version, the Double-Barreled Shotgun is a very powerful weapon that can kill up to 3 Zombies in one shot in earlier levels. It comes in a normal and sawed-off variants.

The Double-Barreled Shotgun in Call of Duty: Zombies.

Aiming with the Sawed-Off variant

Reloading with the Sawed-Off variant

The 24 Bore Long Range reloading. Note the engraved round.

It is worth noting that the regular Double-Barreled Shotgun will be held as if it has a Grip, causing it to hover slightly above the character's left hand. This was most likely done so that a separate holding animation would not have to be created for the regular and Sawed-Off versions of the shotgun. The Sawed-Off w/ Grip version of the Double-Barreled Shotgun can be purchased from the wall in Nacht der Untoten and Verrückt. In the opening cutscene for the map Call of the Dead, Michael Rooker dual wields Sawed-Off shotguns, and at some point uses a single one. These are not usable in the game, however, and appear to be reused models from Call of Duty: World at War. In one instance, he fires five shots without reloading, even though it's only possible to shoot four before reloading.

The Sawed-off Shotgun (referred to as the Model 21[1] in pre-launch footage, strategy guide and game files) appears in Call of Duty: WWII. It is unlocked upon prestiging the Expeditionary Division once.

It has similar damage to that of the M30 Luftwaffe Drilling, in which it will kill with in 1 shot, but within extremely close quarters due to the large spread of the pellets. Like all shotguns, it benefits from Rapid Fire and Advanced Rifling.

In the January 18, 2018 patch the Sawed-off's weaknesses were adressed with a massive buff. Maximum and mid-range damage was increased, pellets to kill were reduced and reload time was quickened. Also, its hipspread was widened.

The Sawed-off Shotgun can be equipped as a starting weapon and can be obtained from the Mystery Box in all of the current maps except The Final Reich. Damage is high for the early waves as it is a starter weapon , but quickly pales in comparision to other shotguns. The sawed-off is not recommended if one wishes to earn Jolts early on , as it tends to kill rather than injure in the first 10 waves. After wave 10 , the sawed-off will struggle to kill enemies , requiring to be upgraded to be effective. Schnellblitz and Kugelblitz are both highly recommended to increase the damage output of the sawed-off.

When upgraded via the Ubersprengen, it becomes the Last Model , gaining more damage. The Last Model is effective until the late 20s. Although one might expect the Last Model to perform similarly to the Tripps (Upgraded M30) , the M30 has far more damage and an extra shot. Reloads are still a big issue and as such , switching out the sawed-off might not be a bad idea instead of upgrading it.

The Sawed-off Shotgun in first person. 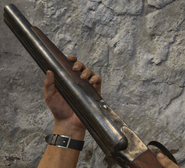 Inspecting a side of the Sawed-off Shotgun.

Inspecting another side of the Sawed-off Shotgun.

The weapon appears in Call of Duty: Vanguard as the Double Barrel.