Call of Duty Wiki
Register
Don't have an account?
Sign In
Advertisement
in: Call of Duty: Black Ops 4 Assault Rifles

The DoubleCross is a double-barreled assault rifle that was added to Call of Duty: Black Ops 4 with the Operation Dark Divide update.

The DoubleCross can be obtained from the Mystery Box for 950 points on all maps. When upgraded via the Pack-a-Punch Machine it becomes the Fanged Doom gaining an increased base magazine size of 60, increased maximum reserve ammo of 480 and increased damage.

The DoubleCross can be looted in Blackout from a Blackjack Stash in limited time modes or Alcatraz Portal Quads. It utilizes 7.62mm ammunition.

The DoubleCross in first person. 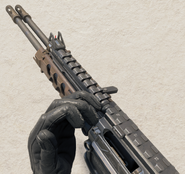 Inspecting the receiver during the inspect animation. Note the signature double barrels.

Early concept for the DoubleCross.