Find and rescue President Vorshevsky
Escape with the President 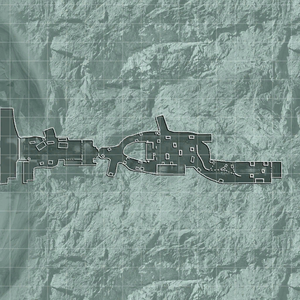 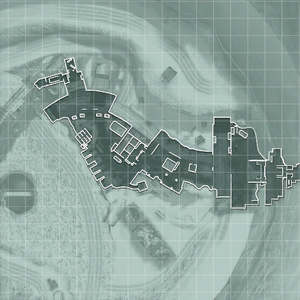 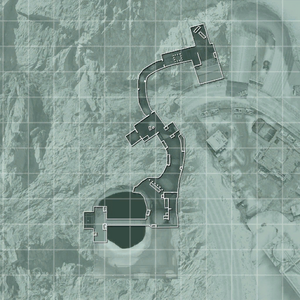 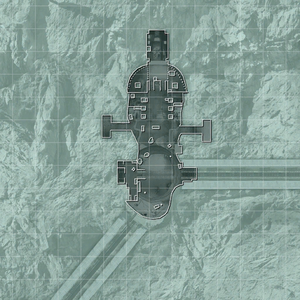 "Down the Rabbit Hole" is the seventeenth and penultimate mission of Call of Duty: Modern Warfare 3. This mission is about Delta Force cooperating with Task Force 141 to save the President of Russia, Boris Vorshevsky, and his daughter from a diamond mine.

The mission starts with a joint task force of the officially reorganized Task Force 141 and Delta Force operatives in an elevator. As it starts its descent, Price takes out a guard inside the lift and the joint force prepare for an engagement. The elevator reaches a lower floor, and the team open fire upon a group of hostiles patrolling the tunnel ahead. However, a Russian RPG hits the elevator, sending it plummeting downwards, killing Sergeant McCoy in the process. The lift crashes into the bottom of the mine, and the team gathers themselves as Russians emerge to engage them. After putting on night vision, the team climbed out of the elevator, pushing forward. Soon after, they reach a fork in the path, and Grinch and Truck take the left while Sandman, Price, and Yuri take the right. Following the paths, both groups end up in a large room, where they face numerous hostiles. After eliminating them, they push forward through two more tunnels and reach a sturdy metal door. Truck steps forward and uses a buzz saw to cut off the door's lock. The team breach the room behind, and clear it of several Russians.

Exiting the room, the team clears out more of the mine, before climbing a staircase and reaching level three of the mine. The team approaches a door that leads to the mine's exterior, and Sandman requests air support. Overlord gives the team control of a predator drone. Price and Sandman kick open the doors and shoot guards looking over the balcony as a battle for air supremacy is fought by American and Russian aircraft. The team vaults the railings and slides down into the construction yard as two little birds drop off friendly reinforcements. After joining the reinforcements, the rescue team fights their way through the construction yard, with Yuri manning the predator drone in a supporting role. As the team nears the entrance to the mine, the predator is shot down, and they are left in the construction yard without a way of accessing the mine.

Overlord responds by calling an air strike on the mine's entrance. Team Metal storms into the mine and finds only wounded hostiles. They breach a door at the end of a corridor but the room is empty apart from Alena Vorshevsky tied to a chair. Price unties her and lays her on a table. Alena whispers that her father is being taken deeper into the mine. The team quickly rushes out a door and sees the Russian President being escorted by enemy soldiers. Behind him, a large group of enemies are firing from a bridge. The team eliminate the hostiles on the catwalk and prepares for rappelling. They rappel off the railing and touch down in the very bottom of the mine. They spot the President being taken inside a bunker with heavy blast doors, and the team is forced to clear out the surrounding areas of enemies. Seeing that the blast door is too thick for them to breach, the task force heads upstairs and lays belts of C4 on the bunker's ceiling. The task force breaches the roof and kills the hostiles before they can execute the President. When the President worriedly asks about his daughter, Price tells him "She's alright. She's alive."

As the team leaves the bunker with the President in tow, explosions shake the mine, and Sandman calls for an air evacuation via helicopter. The joint task force take their positions amongst the rubble as they are ruthlessly assaulted by Ultranationalists. Eventually, a Black Hawk and a Little Bird arrive. The team takes the President to the Black Hawk as the Little Bird is knocked out by an RPG. Soon, Yuri is hit by the Little Bird's crash landing and lies stunned on the floor. As he comes to, Grinch helps the President onto the Black Hawk. Truck helps Yuri by dragging him to the helicopter. While moving backwards, Sandman and Price are firing back at the hostiles as Sandman tells him to go, but Price says: "Don't even think about it, Mate! We're in this together!" Another RPG nearly hits them, as Sandman says to Truck that he needs to cover the right side. Price then says to Sandman: "You better be right behind me!" Then he hands Yuri his M4A1 and helps him while Truck covers the right side after he drags him. As soon as Yuri locks up the M4, everything goes in slow motion.

As Yuri fires at the hostiles, Grinch rolls over to dodge an explosion. Sandman tosses Truck a magazine and he reloads and resumes firing. Grinch drops his empty MK14 and pulls out dual Desert Eagle pistols and fires them in different directions. An RPG round nearly hits Sandman as he continues to fire. A hostile runs towards Sandman, who takes out his knife and stabs him, and then throws it at another incoming hostile. He is then wounded on his right arm. He draws out his Deagle pistol with his free left hand and resumes firing. Price gets Yuri into the chopper, President Vorshevsky helps him up, and Price gets into the helicopter. Before Team Metal can get on board, the Blackhawk is forced to take off, to dodge RPG fire from the ground below. Sandman, realizing that there is no hope for his team, tells the extraction team to leave them behind, despite Price's protests to the chopper pilot to return to save Team Metal. The helicopter pulls out of the hole just as the mine starts to crumble, sealing Team Metal's fate. The mission ends with Price desperately trying to contact Sandman and a US News Caster's report about President Vorshevsky returning to Moscow, Russia, "peace talks between Russia and the US" finally begins, and that "the Ultranationalist leader, Vladimir Makarov, is still at large". 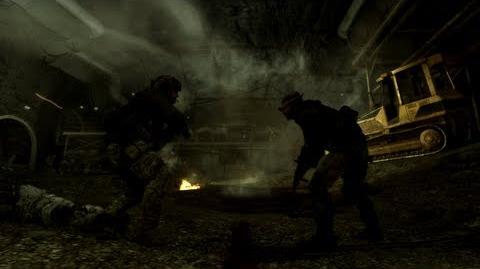 Task Force 141 and Delta Squad badges in the opening cutscene.

Team Metal's last stand in the diamond mine.

The teams rappel down the mine.

Sandman about to kill a Russian soldier.

President Vorshevsky helping Yuri to get into the chopper.

Alena tied to the chair.

McCoy in the elevator.

McCoy killed in the elevator.
Add a photo to this gallery

42. Once escaping the crashed elevator, enter a control room. Look for the intel on a filing cabinet in this room.

43. After breaching the floor and saving the President, look for a small area near the entrance with a barrel, and the intel will be sitting on top of the barrel. 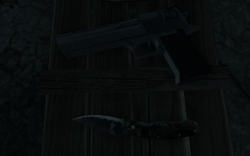 Main article: Down the Rabbit Hole/Transcript

Retrieved from "https://callofduty.fandom.com/wiki/Down_the_Rabbit_Hole?oldid=2502911"
Community content is available under CC-BY-SA unless otherwise noted.