For the multiplayer map from Call of Duty: World at War, see Downfall (multiplayer).

"When the flag of our Motherland flies on top of the Reichstag, all of Berlin will know that the evil of the fascist Reich has been wiped from the face of the Earth."
— Sergeant Reznov

"Downfall" is the 15th and last campaign mission of the Call of Duty: World at War campaign and of the Eastern Front segment of the campaign.

Eliminate them all then proceed down the hall. The player will see some scenes of Russians fighting and then killing Germans inside the rooms that they barricaded themselves in. Continue to the parliament room with plenty of Germans taking cover. Sergeant Reznov will tell the player to go upstairs and provide cover fire. Near the door upstairs is a PTRS-41 rifle, and upstairs in the balcony there are 3 more. Use what the player learned in "Vendetta" and shoot the fuel tanks of flamethrower wielding Germans to blow them up. There are several PTRS-41s around the area, so to conserve ammo, do not waste ammo by taking all the sniper rifles with lots of reserve ammo left. Shoot the Germans with the Panzerschrecks first, as though most of the soldiers will not notice you, some may do so. If ammunition runs short go downstairs and grab weapons from the Germans, such as STG-44s, MP40s, or Gewehr 43s. A last objective in this room requires the player to find a Panzerschreck and use it to shoot down the Reichsadler (huge eagle symbol) on the front wall of the room, destroying the most prominent symbol of the Third Reich, as well as the remaining SS underneath. Once the player does, two Russians will try and force open a door held by Germans, and Reznov will assist them, once the door is broken down, go through, a small party of Germans will be waiting. Once they are neutralized, proceed upstairs to the roof, which will bring the final and hardest battle of the mission.

The final battle's difficulty is due to the fact that there is very little cover on the roof, and many enemies encountered on the same level as the player are wielding STG-44s and MP40s, which can be devastating at close range. Added on to the fact that there are grenades constantly being lobbed at you, multiple Panzerschreck toting enemies with height advantages, and a fortified MG42 at the far end of the defenses. The Machine gunner can be killed by a Mosin-Nagant or a PTRS-41 if aimed well enough. The Panzerschrecks will likely be the most dangerous enemies as it will take two hits to kill you, if not one. Also accounting for multiple enemies shooting at the player from close range. The Rocket soldiers should be dealt with quickly, as they will likely deliver a "1-2 Punch" and dispose of the player quickly.

It is advised that the player takes cover and use any remaining grenades the player has or go to the small cubicles at the left side as the player can flank the Germans. Once all the remaining Germans are killed, follow Reznov to the front entrance. The soldier holding the flag will be killed, but do not fear, a missile strike (presumably from the trucks in the beginning of "Heart of the Reich") will take out the Germans that shot the flag bearer. Take the flag and move towards the Nazi Flagpole. Once there a dying German soldier will pop up out of hiding, and shoot Petrenko almost fatally with a Walther P-38, only to be sliced twice then impaled in the back by a machete-wielding Reznov. Reznov then carries the player forward a bit, assuring the player that he will make it, since Petrenko has cheated death before. Keep moving forward once Reznov cuts the Nazi flag's ropes, and the player plants the Soviet flag, ending the mission. The National Anthem of the Soviet Union is played during the end of the mission.

This is followed by a video containing President Harry Truman's voice mentioning the German surrender in Europe, the bombing of Hiroshima, and General MacArthur's speech following the Japanese surrender, and finally Treyarch's summary of the war, which states "60 million lives were lost as a result of World War 2. It was the most destructive conflict in human history." Once finished the credits will roll, which at the beginning says the game is dedicated to the veterans of WWII who sacrificed their lives for the preservation of liberty. 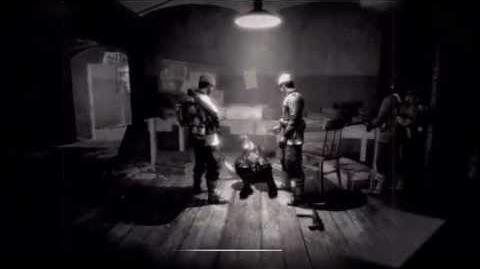 Reznov smiling next to the Soviet flag. 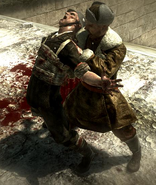 The player holding the Soviet flag in Cooperative gameplay.

Stabbed In The Heart (20

) - Complete all missions on the Eastern Front.

) - Complete the game on Hardened or Veteran.