The Dragon's Breath is only available in the Campaign level "The Defector". The differences to the normal SPAS-12 include the usage of incendiary rounds which will burn enemies struck with the rounds. The attachment makes the weapon extremely powerful, only needing one shot to hit an enemy to kill, even at its maximum range; additionally, it fires 16 pellets per shell instead of the usual 8. Killing ten NVA soldiers during "The Defector" with the Dragon's Breath will earn the "The Dragon Within" achievement/trophy for PS3, Xbox 360, and PC.

Although not available for use in multiplayer via normal means, the effects of the Dragon's Breath against enemy players are similar in combination with the SPAS-12 and Flamethrower. The SPAS-12 can only be obtained through the either the console commands, modding or hacking. As with the regular SPAS-12, it deals heavy damage in close range and usually resulting in a kill however, if the target survives, they will take damage over time whilst their screen/HUD will burn red with flickering flames, similarly when struck by Napalm or Flamethrower attachments. The nature of the weapon is counted as a separate weapon from the regular SPAS-12 available in multiplayer rather than an attachment. Normal SPAS-12 have the ability of replenishing ammunition from a dropped Dragon's Breath and vice versa. 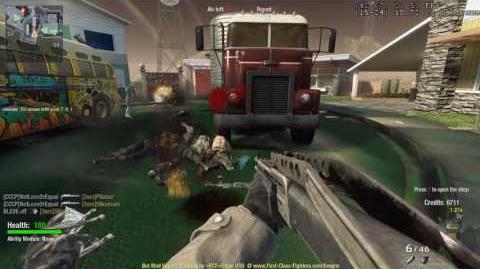 The Dragon Breath appears as an Operator Mod for the MOG 12 shotgun, changing the racked shells to a deep purple. Unlike the incendiary rounds featured in Call of Duty: WWII, these rounds doesn't inflict damage over time, but instead temporarily lowers the target's max health temporarily, akin to the Reactor Core. However, In Zombies the effect is the same as it was in Call of Duty: WWII. The mod is unlocked upon reaching weapon level 10 (13 in Zombies) with the MOG 12 and requires the Secondary Operator wildcard to be used or two attachment slots in Zombies.

The MOG 12 with Dragon Breath in first person

The Dragon's Breath Rounds appear in Call of Duty: Modern Warfare. In the campaign mission "Into the Furnace", they are equipped on the DP-12 shotgun, which is referred to as "DP-12 Incendiary" in the HUD.

Dragon's Breath Rounds were added to multiplayer post-release, and are available to most shotguns (excluding the 725 and the Origin 12 Shotgun).

The Dragon's Breath appear in Call of Duty: Black Ops Cold War as a unique attachment for the Marshal pistol. It exchanges the standard shells for incendiary shells that deal explosive damage and minor fire damage at the cost of a slower reload time and reduced damage range.