"Bolt-action sniper rifle. 1-shot kill to the chest and above. Hold L3 while ADS to steady."
— In-game description

The Dragoon (referred to as Mosin in the game files) is a bolt-action sniper rifle that was added to Call of Duty: Black Ops III on June 11th, 2018. By appearance and performance, it resembles the M40A3 from Call of Duty 4: Modern Warfare.

The Dragoon is a powerful weapon with high damage but slow handling, much like SVG-100. Unlike the rest of its category, the Dragoon reloads one bullet at a time, similarly to sniper rifles—such as M40A3—from early Call of Duty games.

The Dragoon in first person 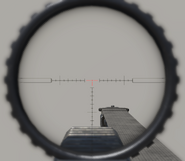 Aiming down the Dragoon's scope 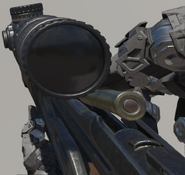 Picking the Dragoon up
Community content is available under CC-BY-SA unless otherwise noted.
Advertisement