"Uh the kind who thinks it's a Dear John. See the address? She wrote "Daniels", not "Red". Only one reason to be so formal. Hate to say it, but I think she's cutting you loose."
— Drew Stiles

Private First Class Drew Stiles is a character in Call of Duty: WWII. He is part of the 1st Infantry Division.

Stiles has a college degree, being the reason why Robert Zussman and Frank Aiello keeps calling him "College". He met the platoon in the boot camp in early months of 1944. Ronald "Red" Daniels used to think he was a pacifist but that isn't the case.

Stiles is a Private of the platoon, serving under Lieutenant Joseph Turner and Sergeant William Pierson. He wants to be a photographer for Life magazine. When Daniels received a letter from Hazel that wrote his name instead of his nickname, Stiles noted that it was a "Dear John" letter and that Hazel was possibly leaving him. Stiles was chastised by Aiello, but learned from Daniels that Hazel was pregnant with their child. He carried his camera throughout the war and took photos at the labor camps and concentration camps in Berga, Germany to expose the Holocaust to the public. Stiles accompanied his platoon in rescuing Zussman from the labor camps, and returned home.

Stiles has the ability to supply the player grenades whenever their grenades aren't at maximum capacity. 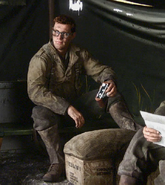 Stiles with his camera in the Hürtgen. 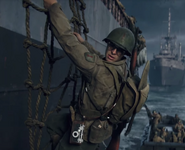 Drew shooting with his camera in epilogue in Call of Duty: WWII