For other uses, see Drone.

"Hidden drone facility in the heart of the Myanmar jungles. Great long engagements down the center, fun close quarters fights inside the facility."
— Map description

Drone is a multiplayer map in Call of Duty: Black Ops II. The map features a hidden factory in the jungles of Myanmar for drones used by the military. In multiplayer, the two factions that oppose each other are the SEALs and the SDC.

The parking lot serves as the SDC starting spawn. It features a small building, and two entrances to the facility. The first one is the sliding door, and the second is a stairway going to a small room with a big window.

The Jungle Area serves as the Seals starting spawn. It features an area partially covered by rocks, a common place for snipers.

The facility is the main part of the map. There are two main buildings connected by a small bridge, each having multiple rooms. 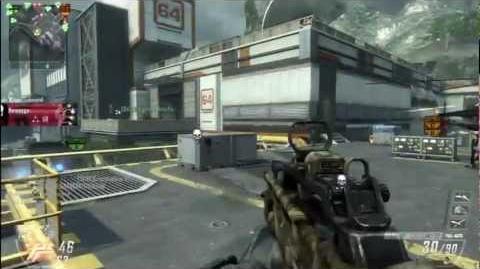