Dual Mags are seen on Simon "Ghost" Riley's M4A1 in most of the comics' covers.

Dual Mags decrease the time needed for every odd reload (e.g. first, third, fifth, and so on) by using two magazines taped together. The following reload will be the normal reload and take the normal amount of time. The odd reload depicts the player removing the spent magazine, flipping it around, and inserting the second, fresh magazine. It is available for all assault rifles (except the M14 and the G11), as well as the AK74u, the MPL, and the RPK.

Since it speeds up reload times and provides more ammo, it reduces the need for Sleight of Hand and Scavenger, but using either or both perks can increase the immediate usefulness of this attachment. However, it should be noted that Dual Mags used with Scavenger Pro do not grant any extra ammunition that is already provided by the perk. Overall, it is a strong attachment choice as it opens up tier 1 and 2 slots to other perks such as Flak Jacket and Hardened to maximize the potential of the player's loadout. For balance purposes, this attachment cannot be paired with Extended Mags or Rapid Fire via Warlord.

The Dual Mags attachment in Zombies only appears on the upgraded Commando (Predator). It performs exactly as in multiplayer, speeding up every odd reload.

The third person view of Dual Mags equipped on an AK-47; note the taped magazines

Reloading a Commando with Dual Mags

Dual Mags reappear in Call of Duty Online, available to assault rifles and submachine guns. In addition to decreasing the time needed for every odd reload, the attachment gives one extra magazine when spawning, and two extra mags to the maximum ammunition.

Menu icon for the FAMAS

Menu icon for the MK14

Menu icon for the Tavor-21

Menu icon for the Mini-Uzi

Menu icon for the SMG5, SMG5SD, and UMG

Menu icon for the Vector

Reloading an AK117 with Dual Mags

Ejecting the Dual Mags from the M4A1 Tech

Dual Mags return in Call of Duty: Advanced Warfare, fully referred to as Dual Magazine. It is available to some assault rifles (AK12, ARX-160, HBRa3, MK14, STG44, M16) and submachine guns (KF5, ASM1, SN6, AMR9). As an addition, when reloading an empty magazine, the weapon isn't cocked if it's an odd reload. Furthermore, the Dual Magazine can now be paired with Extended Mags or Rapid Fire, unlike in Black Ops.

In campaign, dual magazines can be seen on some weapons on the ground such as the KF5 and the SN6, but they are unobtainable. Additionally, in Exo Zombies, the third-person model of the AK12 in the 3D Printer shows it with dual magazines, but the weapon doesn't gain this attachment when picked up.

Reloading the HBRa3 with Dual Magazines

The Dual Magazine appears as an attachment integrated to the Karma-45 and VPR submachine guns in Call of Duty: Infinite Warfare. It allows them faster reloads and increased ammo capacity, which could save the user a perk and attachment slot while also having a tactical advantage over the enemy.

The Karma-45 with its dual magazines

Aiming down the sights of the VPR; note the dual mags

A bit of BO1 free for all D
Gameplay with Dual Mags, along with the Suppressor, on a Galil in Call of Duty: Black Ops. 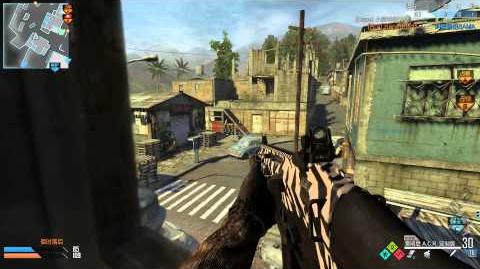