Dunn: "What the hell are we gonna do now, man? Russians got us out numbered, shit's falling from the sky, we're screwed, man! We're totally-"
Foley: "Shut up! Get a grip Corporal! Our weapons still work, which means we can still kick some ass!"
— Cpl. Dunn and Sgt. Foley after the EMP in "Second Sun".

Corporal Dunn is a U.S. Army Ranger with Hunter Two-One, 1st Battalion, 75th Ranger Regiment who fought under the command of Sgt. Foley. He fought in Afghanistan in 2016 against OpFor forces and participated in the opening attacks of the Russo-American War.

Corporal Dunn makes his first appearance in "S.S.D.D.", in Afghanistan checking his Desert Eagle and then running PFC Allen through "The Pit". Dunn then accompanies Sgt. Foley and PFC Allen during "Team Player", to take a school controlled by local militia. Dunn (with Foley) does not make an appearance again until the next Rangers mission "Wolverines!". Hunter 2-1 appears to have been called back to America in the intervening days. He, along with Sgt. Foley, as well as Allen's replacement, Private James Ramirez, fight through Virginia, extracting Raptor and evacuating civilians with the help of a Stryker APC, callsign Honey Badger. The Rangers then move on to Washington D.C., where U.S. forces are fighting a losing battle against Russian troops. Hunter 2-1 takes a Russian stronghold and proceeds to use the anti-armor, anti-air and anti-infantry weapons stored there to take out Russian BTRs, attack choppers and attacking soldiers, buying American evacuation forces valuable time, only to get swarmed by Russian forces. They board a UH-60 Blackhawk with the help of U.S. Navy SEALs, they take out many Russian soldiers in various landmarks, including the World War II memorial, only to get shot down by a massive SAM site atop the Department of Justice.

After crashing, they are swarmed by numerous Russian forces. As the squad runs out of ammunition, Dunn is hit in the shoulder moments before the EMP caused by Captain Price knocks out the helicopters of both the significant Russian air presence and the remaining U.S. forces, killing the Russian soldiers surrounding the Rangers, it also destroyed all electrical equipment, including Ramirez's red dot sight and night vision goggles. The Rangers then escape into a building amid falling helicopters and meet an Army Ranger runner, who tells them that Colonel Marshall is gathering forces to retake the White House. After fighting through Russian stragglers, they reach the White House. They defeat the Russian forces there, and the squad reaches the top of the White House, waving green flares to show that D.C. is back in American hands. They are saved when the U.S. fighters abort the airstrike, and they then start to talk whether they will be deployed to Moscow or not. Dunn insists on getting revenge on the Russians, saying that he will "...burn it to the ground when we get there."

Dunn is the comical relief of the Ranger missions, as heard by his witty dialog and sarcastic sense of humor, similar to Gaz's. He does little to hide his feelings, as heard when he complains to Joseph Allen about how Rangers receive few "Special Ops" missions compared to other U.S. special operations units and to Foley on how their request for air support was denied. He also panics during intense and abnormal situations, as seen during "Second Sun", where he screams as he sees aircraft falling from the sky. He harbors a dislike towards General Shepherd, as the latter cares little about his men.

He cares about his squadmates too, as he may be a combat medic performing life-saving skills on his downed fellow soldiers. He hates the Russians with a vengeance ever since the mission "Wolverines!", and says that if the Rangers ever get deployed to Moscow, he will "burn it to the ground when we get there", like how the Russians devastated Washington D.C.. Dunn, like Sgt. Foley, wears unique equipment compared to other Rangers. He wears a MTV (Modular Tactical Vest), as well as a Delta Force-style helmet similar to Foley's with night vision goggles and also wears a neck guard. He also carries more equipment than others. His signature weapon is a SCAR-H with a thermal scope.

Dunn: "What the Hell are we gonna' do now, man? Russians got us outnumbered, shit's falling from the sky. We're screwed man! We're totally—"
Foley: "Shut up! Get a grip Corporal! Our weapons still work, which means we can still kick some ass!"
— Dunn and Sgt. Foley in "Second Sun" reacting to the EMP

"I don't know what's worse, man - dodging falling helicopters or freezing my ass off in this monsoon."
— Cpl. Dunn's comment on the rain in "Second Sun"

"C'mon since when does Shepherd care about danger close?"
— After hearing "Isn't this danger close for the task force?"

"Sarge, did HQ tell us to go "F" ourselves?"
— Dunn in response to being denied air support by Overlord at the beginning of "Wolverines!". 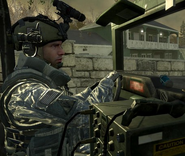 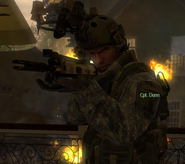 Dunn aiming down his SCAR-H. 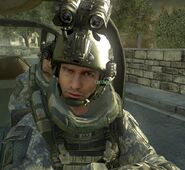 Dunn and Foley at the Oval Office. 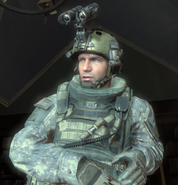